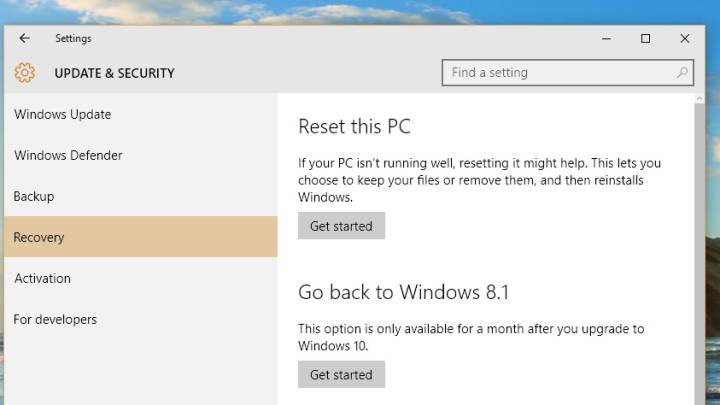 So, you’ve installed Windows 10 on your laptop, tablet or desktop and for some reason, you don’t like what Microsoft has done to fix the tragedy that was Windows 8. Or, perhaps you’re aware of some bugs that Microsoft hasn’t yet patched. Luckily for you, Microsoft lets you downgrade back to a previous Windows version right from inside Windows 10, and the procedure is relatively easy, though not quite hassle-free.

As Gizmodo points out, Microsoft included an option to downgrade a computer to Windows 8.1 if you so desire. Just go to Update & Security and choose Recovery.

A few clicks later you should find yourself running Windows 8.1 again on your machine. However, even if the install procedure seems to be pretty seamless, you can expect things to go wrong as soon as you start running apps.

Some of the apps might appear to be deleted at first, or might not even start (like Google’s Chrome browser), which means you’ll have to reinstall them. Make sure to search for them on your machine first though, as some missing apps might still be there.

You may encounter other issues as you go back to Windows 8.1, so you’ll just have to address them yourself as you go along.

On the other hand, since Windows 10 is available for a free upgrade that’s been widely praised in reviews, you might be better off sticking with the future rather than clinging to the past.