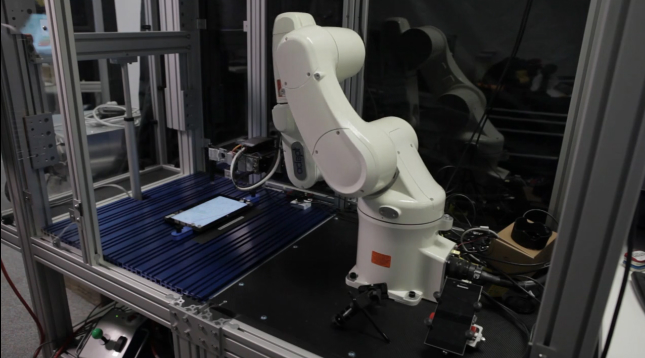 Intel’s Oculus robots play smartphone games such as the popular “Cut the Rope” title to test the accuracy of touchscreens on mobile devices. The software then actually scores screens following the tests, attributing a rating to them based on data taken from Intel’s cognitive psychology experiments conducted on hundreds of people who use touchscreen devices, MIT Technology Review writes. To score displays, in addition to the Oculus, a Hollywood-grade Red camera is used to capture video at 300 frames per second in resolution higher than HD – the camera records everything the robot does, and the data can be used to determine the accuracy and responsiveness of displays under certain test parameters.

When playing “Cut the Rope,” the robot users two fingers with rubbery pads on the ends, obtaining a “perfect score,” although it can also be pre-programmed to fail levels. Other tests look at how virtual keyboards respond to typing or how the screen scrolls and bounces when navigating through a long list, as the robot can do pinch to zoom gestures, drags, flicks and touches, or at how styluses are used. Additionally, the robot can be used to test the accelerometer and gyroscope features of a smartphone. The robot can be pre-programmed to simulate different kind of real world users from “the first-time user who I being slower” to “someone hopped up on caffeine and really going fast,” as robotics engineer Eddie Raleigh who helped build the Oculus puts it.

The processed data, coming from three Oculus robots – with a fourth one in the making – is used by Intel and its partner companies that have touchscreen devices with Intel chips inside. Such technology is also used by many other companies that manufacture smartphones, tablets and all-in-ones, even if it’s not heavily publicized.

“The Samsungs, LGs and Apples all have these kinds of things,” Sauce Labs co-founder and CTO Jason Huggins who’s also working on similar app-testing robots says. “But they don’t talk about it because they don’t want their competitors knowing.” However, the Oculus may be slightly more advanced than his peers at other companies, because it actually compares devices based on how people use touchscreens instead of following fixed test patterns.