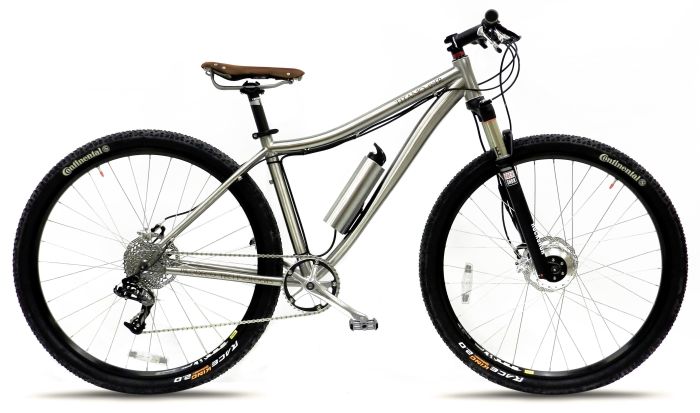 People who are still complaining about the price of the gold Apple Watch will probably also freak out reading about the Titanio 29er, an impressively light-weight titanium electric bike that’s also rather expensive.

Priced at $4,999, ProdecoTech’s 29-incher has some interesting specs, including an electric motor that can deliver a max output of 420 watts and a top speed of 18mph. The 33V/9.3Ah battery is good for 30 miles on a charge, and the best part about it is that it’s disguised as a water bottle. The pedal-assist motor is placed in the front-wheel, Wired says, and it offers five levels of motorized assistance.

The Titanio 29er has a titanium frame, as the name suggest, and 29-inch rims. In spite of its size, the electric bike weighs just under 33 pounds, which is more than what standard bikes of similar size weigh but a lot less than other electric models.

If paying $5,000 for an electric bike is too much for you, then you should know ProdecoTech has plenty of other interesting electric bike designs for more affordable prices. That said, none of them are available at this point.

More details about the Titanio 29er, and other models in the company’s lineup are available at this link.

Another interesting electric bike design is the JIVR, currently seeking funding on Kickstarter, with prices set at around $3,000 before special discounts.