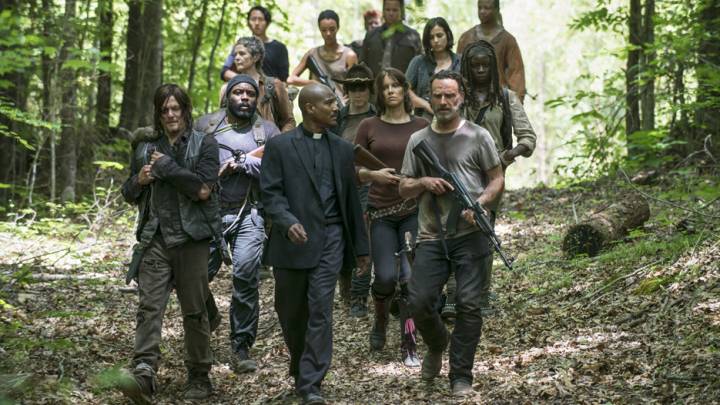 Beware, Walking Dead fans: I’m about to spoil last night’s episode for you, so in case you haven’t seen it yet, walk away right now. This is your last chance.

The previous episode brought us an unexpected ending, which I dubbed The Walking Dead’s Jon Snow moment. Glenn, one of the crowds’ favorite characters, seems to die at the end of episode 3, although it’s not entirely clear whether he’s really being eaten alive by walkers.

In case you hoped episode 4 would  clear the air on Glenn’s fate, well, you’re just going to keep waiting, as the fourth episode in the new season is all about Morgan. Titled “Here’s Not Here,” the episode is a flashback showing what Morgan has been up to since his last appearance.

As fans of the series will remember, Morgan wasn’t exactly the peaceful character he seems to have become in season 6. After losing his wife and kid, Morgan went to a dark place, fighting for his survival and killing anything he encountered, walkers and humans alike, while at the same time wishing he was dead. Fans will also quickly recognize various Easter eggs that tie Morgan’s story, at least chronologically, to what happened to Rick & Co in the past few seasons.

The flashback shows us how Morgan turned his life around, learning to accept what happened and convincing him to cherish any life. Morgan’s unlikely road to redemption started when he tried to assault another person’s home in the woods, although its owner proved to be no easy pushover. Indeed, the cabin’s owner quickly throws him onto the ground and locks him in a cell inside the very cabin that he wanted to steal for himself. While in captivity, he learns that his captor is a former prison psychiatrist named Eastman.

Eastman, unfortunately, won’t be a recurring character. In case you didn’t figure it out yet, he dies by the end of the episode but not because Morgan killed him. Morgan tries, of course, but Eastman quickly subdues him again and begins working Morgan through his problems therapeutically. While his treatment of Morgan is successful, Eastman meets his end when he saves Morgan when he freezes in front of a walker and gets bitten in the process.

It’s because of Eastman that Morgan refused to kill the Wolves he already met in the woods, as well as the attackers of Alexandria. In fact, Morgan captured a Wolf and locked him in a house in the town. This is where the flashback occurs, as it appears that Morgan wants to pass along the teachings of Eastman to the young man he captured.

While Morgan’s new way of living in this cruel world should certainly benefit him personally, it’ll be interesting to see whether his actions will jeopardize the security of the Alexandria group.

And no, there aren’t any traces of other characters in episode 4. Morgan, Eastman (played by John Caroll Lynch), plenty of zombies and some non-essential humans, including the Wolves gang member that’s tied down in a house, are the only stars of this week’s Walking Dead fix.

So what about Glenn, then?

Variety notes that Steven Yeun, the actor playing Glenn Rhee, was not featured in the opening credits. This might be another attempt to keep the audience guessing. Meanwhile, The Walking Dead officials would not confirm’s Glenn’s death just yet.

“We will find out what happened to Glenn…” executive producer David Alpert said. “I feel like, regardless of what happened to Glenn, he paid a tremendous price for having been human to Nicholas, and that, to me, from an emotional point-of-view — whether or not Glenn is alive or dead or something else — the Glenn that we knew, the one that believed in the better side of humanity, I think is dead.”