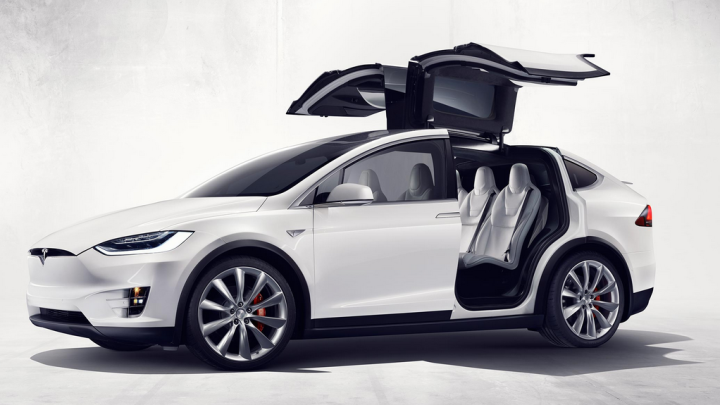 Earlier this week, Elon Musk officially took the wraps off of Tesla’s completed Model X, an SUV modeled after the wildly successful Model S. Though the Model X has a lot in common with the Model S — it’s purely electric, it features a 17-inch display on the dash — the Model X is a whole lot more than a simple Model S clone in SUV form.

Design wise, one of the more intriguing and unique features of the Model X (aside from its “Bioweapon defense mode“) is that its two rear doors are what Tesla calls Falcon Wing doors. As opposed to traditional car doors which open outward in a horizontal fashion, the Model X’s Falcon Wing doors open up vertically. What’s more, because the Model X doors are double-hinged, they can open up fully even when there’s just 12-inches of space to each side, a feat accomplished by having the doors open up upwards before opening up outwards.

As cool as it is to see the Falcon Wing doors open up on video, there’s a whole lot more going on behind the scenes to ensure that the doors works well in any given situation.  Speaking to the engineering wizardry that went into designing the Model X’s Falcon Wing doors, Wired reports that the doors are much “smarter” than they would appear. Indeed, Tesla has adorned the Model X with a number of sensors — capacitive, sonar, and inductive — to prevent the doors from even attempting to open up in spaces that might ultimately be too small.

The big drawback of doors that open like wings—the Mercedes-Benz AMG SLS has them, as did the DeLorean—is they require a lot of room to open, so you’re always worried about hitting something. Tesla got around this by double-hinging the doors, and fitting each with an ultrasonic sensor and putting a third on the roof. They scan the area around the vehicle to determine how much space there is, then adjust the “span” and open accordingly.

It sounds complicated as hell, and it is, but it works beautifully. Tesla engineers say the doors can open with as little as 12 inches on each side of the vehicle—then proved it by having us park between two cars. The mirrors on the X were mere inches from those of the car on either side, yet the doors opened flawlessly. Capacitive sensors in the edges of each door sense obstacles within 2 to 4 inches, so you don’t have to worry about a descending door whacking your head or crushing your fingers.

Below, you can check out Elon Musk showcasing the Model X’s Falcon Wing doors in action.

While we’ll have to wait a little bit longer before we see an exhaustive review of the Model X, many of the first impressions we’ve seen thus far have been exceedingly positive. If you’re at all interesting getting your hands on a Model X of your own, the bad news is that you’ll have to wait a bit. Due to incredibly high demand, all new Model X orders won’t even begin shipping until mid-2016 at the absolute earliest.