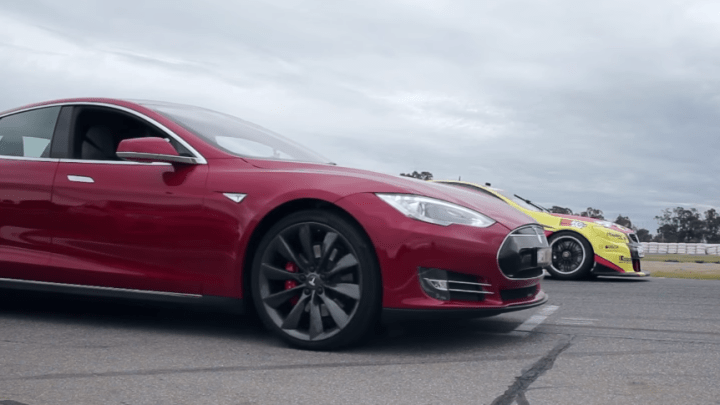 We’ve seen the Tesla Model S P85D square off against some impressive cars in drag races in the past and now the team at CarAdvice.com.au has posted a video showing how it fares against two new Australian rivals: The Walkinshaw Performance W507 HSV GTS and a Holden Commodore V8 Supercar that was designed exclusively for auto racing.

DON’T MISS: Samsung gets a celebrity endorsement no sane company would want

The Tesla handles the Walkinshaw quite easily but the Holden V8 Supercar promises to be a more intriguing match. The Model S P85D goes from 0 to 100 kilometers per hour in 3.3 seconds while the Holden can do it in 3.4 seconds. Additionally, the Holden weighs in at a mere 1,400 kilograms (3,086 pounds) with the driver included, making it an incredibly light vehicle.

Despite this, the Model S P85D still beats the Holden by a pretty comfortable margin. As we’ve seen in the pat Tesla’s flagship car is really an incredible piece of engineering, even though it still doesn’t have what it takes to beat a Lamborghini Aventador in a drag race.

Check out CarAdvice’s full video of the race below.