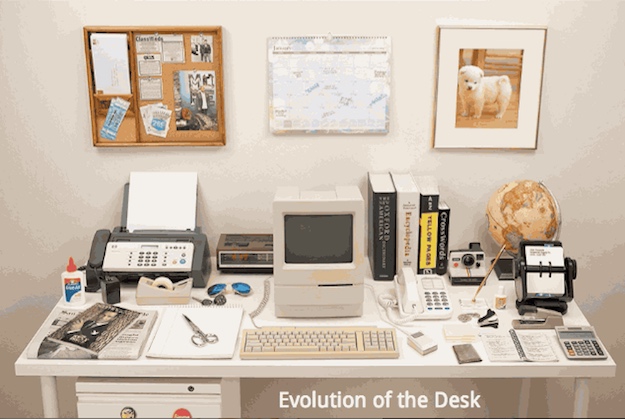 It’s easy to take the modern-day wonderland we live in for granted. With desktop computers, tablets, and smartphones now more prevalent than ever, it’s just as easy to forget how cluttered our lives were before these technological advancements entered the mainstream and became commonplace.

Highlighting this rapid evolution, an animated gif produced by the team at BestReviews demonstrates how technological innovations have not only changed our lives, but have helped clear room on what were previously cluttered desks.

Behold, the evolution of the desk.

The animated gif moves pretty fast, but you watch closely you can see small little app icons flash across the screen to indicate instances where vestiges of a time gone by are now nothing more than distant memories.

Note that this awesome animation was originally put together by BestReviews whose offering provides some cool interactive features that are worth checking out.