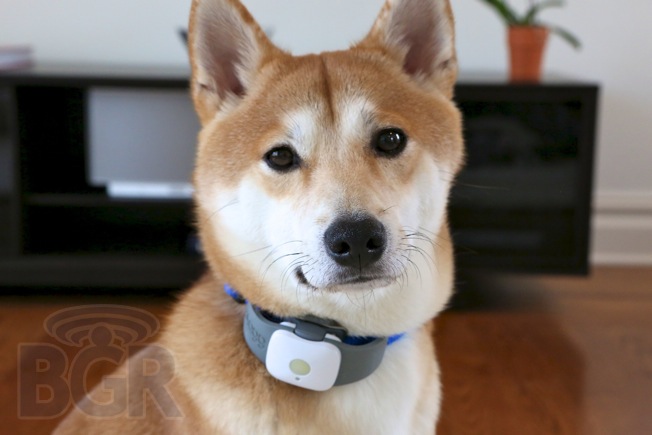 How many times have you or someone you know lost a pet? I’ve been looking for something I can use to keep track of my dog, Moto, when we take him out of the house — you know, in case he starts to chase a squirrel and gets off leash. The Pet Tracker is the best thing I’ve found so far. It’s a reasonably small puck (with wings) that securely attaches to your dog’s leash, and it features a cellular connection to provide data on your pet’s whereabouts. It will also provide information about the device itself. The Pet Tracker charges on an included charging base in under a few hours, and in normal usage with Moto in the house most of the time, and the Pet Tracker reasonably close to the charging base, I’ve seen it last upwards of one week.

The concept isn’t new, but it’s done in a way that completely takes the frustration out of using something to track your pets. After you set up and register your Pet Tracker through their website, you’re able to define geo-fences that will alert you whenever the device is outside of that zone (from 75 to around 1,000 yards). This includes push notifications on your iPhone through the company’s iPhone app, text messages, and emails that even include a snapshot of a map with your pet’s location. You can also get alerts when the battery on the unit is low to remind you to charge it, too.

While the features of the Pet Tracker are impressive, they aren’t always completely accurate, and don’t offer 100% perfect real-time information about your pet all of the time. Additionally, the web site interface could be simplified and could be a bit faster to load and navigate.

Even so, having something that combines an always-on connection with GPS into a small and compact package is refreshing when other options are bulky and incredibly expensive. That’s not to say that the Pet Tracker is totally inexpensive — it’s $99.95 for the package with one month of monitoring service, and $7.95 a month after that. Compared to other alternatives though, this is easily the best all-in-one solution by far. Make sure to check out all of the photos in the gallery.