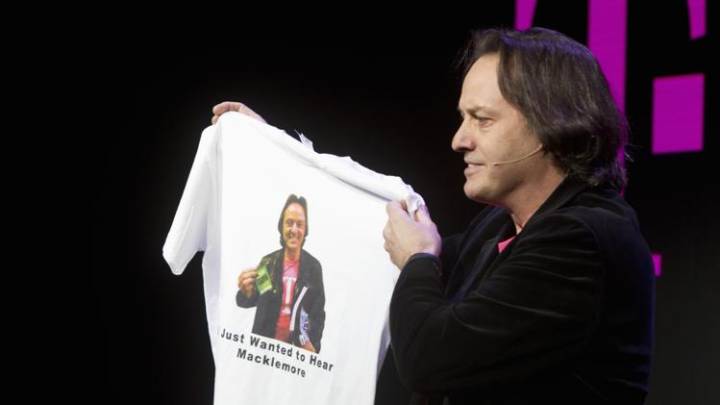 T-Mobile CEO John Legere never, ever stops trolling. On the same day that AT&T released its Q4 2013 earnings report, T-Mobile put out a press release that sarcastically praised the company for the supposed change of heart it’s had in making its wireless plans more like T-Mobile’s.

“T-Mobile today announced that pretty much everyone at the company is overcome with emotion and still kind of processing the decision by now-ex-rival AT&T to leave the dark side, step into the light, and join hands in supporting the Un-carrier consumer revolution,” the company wrote and cited AT&T’s decision to offer T-Mobile customers as much as $450 to switch carriers as evidence that AT&T was now on its side.

“Wow. I mean… wow,” T-Mobile CEO John Legere said in the press release. “I guess we all have moments of doubt. You know? Like, can the darkness ever be defeated? But that they’ve singled us out in this way is just so affirming. I guess we must be doing something right. I mean, if AT&T can change, it feels like anything’s possible. It’s kind of like that scene where Darth Vader’s lying there and Luke helps take off his helmet and you see that, okay, sure, Darth Vader’s pretty ugly, but he’s human after all.”

AT&T beat the consensus expectation on Tuesday by reporting fourth-quarter earnings of $0.53 per share on $33.2 billion in revenue while adding 566,000 postpaid wireless subscribers. Although the company’s postpaid additions couldn’t compare to T-Mobile’s 869,000 over the same period, AT&T also posted a much lower churn rate of 1.1% compared to T-Mobile’s 1.7%.

BELLEVUE, WA — Jan. 28, 2014 —T-Mobile US, Inc. (NYSE: TMUS) today announced that pretty much everyone at the company is overcome with emotion and still kind of processing the decision by now-ex-rival AT&T to leave the dark side, step into the light, and join hands in supporting the Un-carrier consumer revolution.

“Call it an awakening,” said Ralph de la Vega, president and CEO of AT&T Mobility, “but I felt it was time to really stir things up and put the customer first for a change.  And by “customer” I’m referring to our former customers who switch to T-Mobile, because our current customers don’t really qualify.”  De la Vega said that the new T-Mobile switching offer was custom designed to entice its millions of contract customers to go ahead and give T-Mobile a try. “If for any reason you don’t love T-Mobile’s 4G LTE network, which is now faster than ours[i], we’ll actually pay you up to $450 to come back to AT&T, I kid you not.”

Ok, De La Vega didn’t actually say that, but he might as well have. Thanks to AT&T’s apparent change-of-heart and incredibly generous $450 T-Mobile customer buy-back campaign, insane numbers of its very own customers and even families of AT&T employees are enjoying a risk-free, zero-cost opportunity to switch to the Un-carrier. If customers making the switch are not completely satisfied with T-Mobile and its state-of-the-art nationwide 4G LTE network (now fastest in the U.S.)i, AT&T will cover the costs for customers switching back to their own slower network, up to $450 with trade-in[ii].  Details of the new AT&T offer can be found at att.com/att/switcherpromo.

“Wow. I mean … wow,” breathed John Legere, president and CEO of T-Mobile. “I guess we all have moments of doubt. You know? Like, can the darkness ever be defeated? But that they’ve singled us out in this way is just so affirming. I guess we must be doing something right. I mean, if AT&T can change, it feels like anything’s possible.

“It’s kind of like that scene where Darth Vader’s lying there and Luke helps take off his helmet,” Legere continued, “and you see that, okay, sure, Darth Vader’s pretty ugly, but he’s human after all.”

This is all a result of T-Mobile’s latest game-changing “Contract Freedom” offer, announced as “Un-carrier 4.0” earlier this month.  T-Mobile now pays contract termination fees to any new or existing customers who switch their number to a post-paid Simple Choice plan and trade-in their eligible phones[iii]. With Contract Freedom and the added assurance of AT&T’s amazingly synergistic offer – massive numbers of AT&T customers nationwide are leaving the dark side and switching over to the Un-carrier. And, though Sprint and Verizon customers are also signing on to the Un-carrier in unprecedented numbers, nearly 39% of those new T-Mobile customers are coming over from AT&T.  Even families of AT&T employees are joining in the joyful exodus – as they discover T-Mobile’s Simple Choice Family Plan is actually a better option than its own employee family rate plans that AT&T offers.

“Somebody pinch me,” said Mike Sievert, Chief Marketing Officer. “By offering a risk-free way for their millions of customers to come over to T-Mobile – AT&T has helped put this Un-carrier consumer movement into overdrive. At T-Mobile we stand for Contract Freedom, and I want to thank our friends at AT&T for helping us liberate their former customers.  This isn’t just about switching offers — it’s about T-Mobile giving customers the service, the network, and the wireless experience they deserve, without having to worry when they switch.”

Sievert noted that AT&T’s recent full-page ad in The New York Times had signaled a real turning point in his mind – that the former industry rival had truly stepped out of the darkness and was seeking to mend its ways and support the Un-carrier consumer movement.

“I mean, a full page ad in The New York Times,” said Sievert. “That says commitment to me.”
With “Contract Freedom”, customers with other carriers who hand in their eligible devices at any participating T-Mobile location and switch their number to a postpaid Simple Choice Plan can receive an instant credit – based on the fair value of their phone – of up to $300. They then purchase any eligible device, including T-Mobile’s most popular smartphones now priced at $0 down (plus 24 monthly device payments, for well-qualified customers). After customers get the final bill from their old carrier (showing their early termination fees), they either mail it to T-Mobile or upload it to http://www.switch2tmobile.com. T-Mobile then sends an additional payment equal to those fees, up to $350 per line. Trade-in of their old phone, purchase of a new T-Mobile phone and porting of their phone number to T-Mobile are required to qualifyii.

This offer to pay early termination fees provides families with a quick way to escape carrier service contracts that have deterred them from pursuing a better and more affordable wireless experience with T-Mobile.

With a Simple Choice Plan from T-Mobile, families start with one line at $50 per month for unlimited talk, text and Web with up to 500 MB of 4G LTE data. They can add a second phone line for $30 per month, and each additional line is just $10 per month. In short, a family could get four lines for just $100 per month (plus taxes and fees). The potential savings are so significant that if every single AT&T, Sprint and Verizon customer switched to a Simple Choice Plan, T-Mobile estimates they would save up to $20 billion collectively each year[iv].

In addition to great family plan savings, individuals and families can also enjoy an incredible wireless experience thanks to T-Mobile’s rapidly expanding nationwide 4G LTE network – now the fastest in the United States. For more information, visit the T-Mobile newsroom.