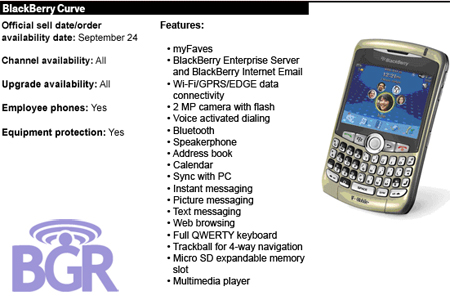 Well, isn’t this a glorious day. You begged, you pleaded with the T-Mobile gods, and now we finally have something concrete. It seems as if September 24th is the rumored launch date set in stone for one of the most anticipated BlackBerry devices to date — the BlackBerry Curve with WiFi + UMA (8320). We’ve got a string of other handsets we’re sifting through at moment from our oh-so-fabulous informants, but in the meantime, I guess we can all just "marinate" on this BlackBerry Curve launch date. Yeah, it’s golden. Hey T-Mobz, care to send us an embargoed unit? Thank ya’s