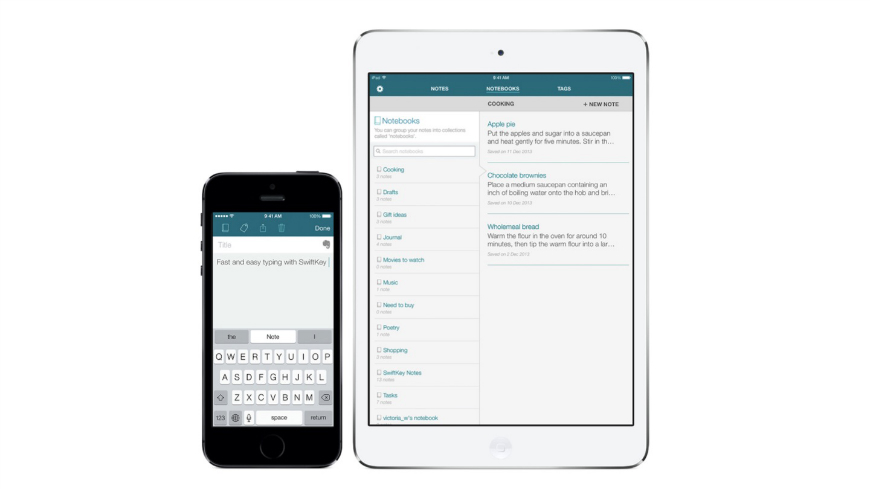 SwiftKey on Thursday announced its first ever iOS application, SwiftKey Note, which is available to iPhone, iPad and iPod touch users as a free download from the App Store. The application, already seen in a couple of leaks in previous days, aims to bring users “faster note taking to iPhone and iPad,” although it won’t replace the default keyboard in iOS, something Apple still doesn’t allow app developers to do.

SwiftKey Note will include features that helped it become one of the most popular keyboard apps in the Google Play Store including personalized auto-correction and three next-word suggestions that appear in a row on top of the keyboard, continuously changing as the user advances with the text. The app is supposed to become better in time and offer more tailored word predictions, as it learns from the user’s past typing experience.

Compatible with devices running iOS 6 or later, the application will come with Evernote integration and sync support, meaning that it’ll be able to learn from related notes stored in your Evernote account, as well as sync newly created notes across devices.

“With SwiftKey Note, we’ve worked closely with Apple and Evernote to bring all of the power of SwiftKey’s mind-reading prediction technology to iPhone and iPad users everywhere,” SwiftKey Chief Marketing Officer Joe Braidwood said. “Whether it’s in the meeting room, lecture hall or grocery store, with SwiftKey Note you can now take much faster notes, getting a more human typing experience from your devices and remembering more of the things that matter in your life.”

In addition to improving the efficiency of your typing, the Swiftkey Note app also comes with easy formatting features allowing users to further edit their notes – as seen in the video above – and support for multiple languages including English (U.S. and U.K.,) French, (FR and CA,), German, Italian and Spanish (ES and U.S.).

Inside the app, users will be able to track their stats including efficiency, keystrokes saved, typos corrected, words predicted and words completed, and organize notes with the help of notebooks, labels and tags.

As for the SwiftKey Keyboard app, it’s already a hit in the Play Store, having been downloaded up to 5 million times by Android users, and enjoying an average rating of 4.7 stars out of 5 from more than 350,000 reviews. But iOS users will still have to wait for a similar app to launch on iOS.

More images and the full press release follow below.

The app features a tight integration with Evernote®, giving users the option to personalize SwiftKey’s word suggestions based on their Evernote archive and providing seamless sync of new SwiftKey Notes onto the platform.

SwiftKey’s hallmark prediction bar above the keyboard makes typing faster and easier. It offers highly personalized auto-corrections and three next-word predictions as a user writes. The app also gets smarter the more it’s used as it adapts to each individual’s writing style.

Joe Braidwood, SwiftKey’s Chief Marketing Officer, said: “With SwiftKey Note, we’ve worked closely with Apple and Evernote to bring all of the power of SwiftKey’s mind-reading prediction technology to iPhone and iPad users everywhere. Whether it’s in the meeting room, lecture hall or grocery store, with SwiftKey Note you can now take much faster notes, getting a more human typing experience from your devices and remembering more of the things that matter in your life.”

Chris Traganos, Head of Developer Outreach at Evernote, said: “Pairing SwiftKey’s predictive keyboard with the Evernote Platform is a transformative experience for creating quick notes. We’re excited to have SwiftKey Note’s two-way sync with Evernote and to build this relationship.”

Today’s launch marks the first time SwiftKey’s word prediction technology has been made available on the App Store. The company is already well known for SwiftKey Keyboard, the best-selling paid app on Google Play™ in 2013. It also partners with major technology companies, software vendors and healthcare providers to provide a more productive, more human typing experience in a range of contexts.

Faster, easier note taking – with three next-word suggestions and personalized auto-correction;
It learns from you – the more you write, the more tailored your predictions become;
Organize your notes – group related notes together in notebooks, label and categorize your notes with tags for easy searching;
Evernote personalization – let SwiftKey’s prediction technology learn from your archive;
Evernote sync – sync newly created notes across devices or to the cloud and import and create new notebooks and tags with your Evernote account;
Easy formatting – swipe the word suggestion bar to the left to reveal bold, italic, underline, indent and bullet points options;
Share your notes – using AirDrop, Messages, Mail or Copy to Clipboard, as well as Evernote sync;
Multilingual – get contextual word suggestions in up to three languages simultaneously;
Track your stats – get real-time analysis of your typing productivity including Efficiency, Keystrokes Saved, Typos Corrected, Words Predicted and Words Completed;
Easy on-boarding – a fun and engaging tutorial introduces new users to SwiftKey’s prediction technology.

The app is available globally for free through the App Store and is compatible with iPhones, iPads and iPod touch® devices running iOS 6 or later. Formatting is currently only supported on iOS 7.