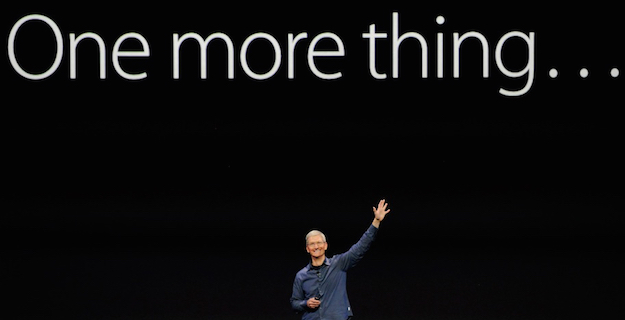 Apple not surprisingly ruffled more than a few feathers when it released the Apple Watch this past April. While consumers have been overwhelmingly pleased with Apple’s wearable, traditional watchmakers remain understandably wary of a bold, new, and technologically savvy new entrant into a market they were accustomed to ruling with an iron fist.

Swatch in particular hasn’t been shy about its feelings towards Apple. In May of last year, before Apple had even unveiled the Apple Watch, the Swiss watchmaker said that it would sue Apple in every jurisdiction it could if it released a device called the iWatch. Swatch at the time said that such a name would infringe upon its own trademark for iSwatch.

And speaking of trademarks, Swatch recently pulled off one helluva troll job this past week when it acquired the trademark rights to “One more thing”, an arguably iconic phase that many, at least in the tech world, associate with Steve Jobs’ famous product introductions.

According to Patently Apple, the trademark was originally registered and approved this past May, just one month after the Apple Watch was released.

While Apple hasn’t used the “One more thing” tagline much since Steve Jobs’ passing, Tim Cook did resurrect it to great effect this past September when introducing the  Apple Watch.

The Next Web adds:

There’s no telling what Swatch will use the trademark for. Maybe it just wants keep Apple from using the phrase. Or maybe it plans to troll the company with a future ad campaign, given the Apple Watch is often seen as a threat to the Swatch’s traditional watch market (even if it probably won’t kill it off).

Either way, Apple likely isn’t too happy about either of the trademarks, but considering neither of those expressions are often used by the company anymore, it’s probably no big harm.

Lastly, and in something we can assure did not originate from The Onion, Swatch also filed a trademark for “Tick Different”, a clear play on Apple’s iconic “Think Different” ad campaign which ran from 1997 through 2002.

As a final point of interest, and speaking to how closely the ‘One more thing’ phrase is associated with Apple, Steve Jobs used it 31 times between 1999 and 2011.