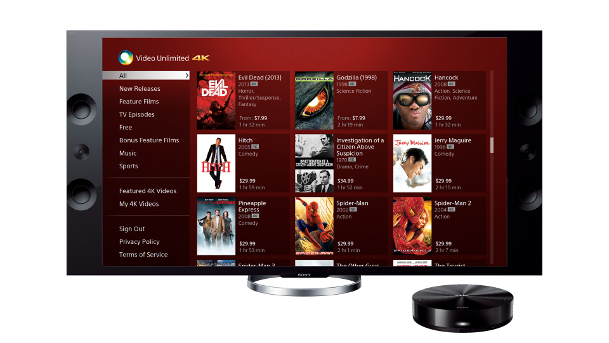 Coinciding with the many announcements Sony made on Wednesday at IFA 2013 about Ultra HD TVs and projectors, the company has launched Video Unlimited 4K, a video store featuring Ultra HD content to rent or buy. The 4K video store can be accessed on Sony’s 4K Ultra HD Media Player and currently offers over 70 movies and TV shows, including AMC’s Breaking Bad. 24-hour rentals for TV shows will cost $3.99, movie rentals will be $7.99, and buying a movie outright will cost $29.99. The library should grow to over 100 titles by the end of 2013. Sony’s official press release follows below.

To coincide with the debut of the Video Unlimited 4K service, Sony today expanded its 4K Ultra HD TV line-up with the addition of the X850A series, available in 55- and 65-inch screens (models XBR-55X850A and XBR-65X850A). With four times the resolution of Full HD and Sony’s unique TRILUMINOS Display, the new X850A incorporates a slim bezel with an elegant design without the integrated magnetic fluid speaker system in the X900A series (models XBR-55X900A and XBR-65X900A) now on the market. This new design offers customers the flexibility of connecting to an existing or separate home theater system.

“We have been spearheading the advancement of 4K Ultra HD technology from the start, and have now reached another milestone as promised with the Video Unlimited 4K service going live,” said Sony Electronics President and COO Phil Molyneux. “Sony 4K Ultra HD TVs featuring our exclusive TRILUMINOS Display have been receiving amazing feedback and now we are bringing the most immersive entertainment experiences to new audiences right in their living rooms.”