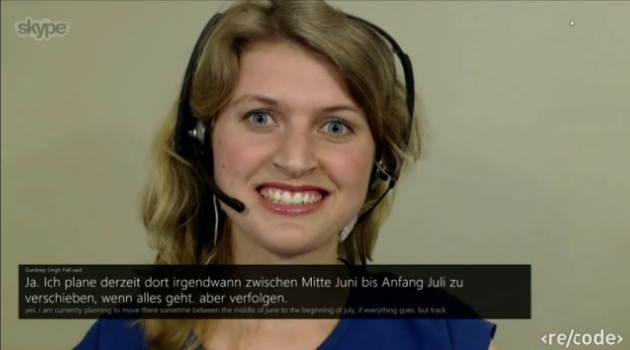 Microsoft at Re/code’s Code Conference revealed that it’s moving forward with its Skype voice and video call translation product, demoing on stage a pre-beta version of Skype Translator, which could be the final name of the product. The service will allow users to talk to each other via Skype in their own language and speech will be translated on the fly.

Initially, Skype Translator will be available only on Skype for Windows, although the company plans to add support for many other devices, including mobile phones, in the future. The program will only support a handful of languages at first, but additional languages will be added in the future.

It’s not clear exactly when the new feature will become available to users.

The Skype Translator waits for the person speaking to finish a phrase, at which point it translates it in the other language. That way, the speakers hear each other talk before hearing translations. The translator was rather accurate, although there were some hickups here and there, which are expected for beta products.

The company plans to improve translations in the future, and wants to use the “real language that people speak” in order to make the translator significantly better. Pall said that Skype handles more than three quarters of a trillion minutes of conversations each year, which means that’s plenty of data for Microsoft to use to improve the service, assuming users are willing to share their calls with the company.

A video showing the Skype Translator demo follows below.