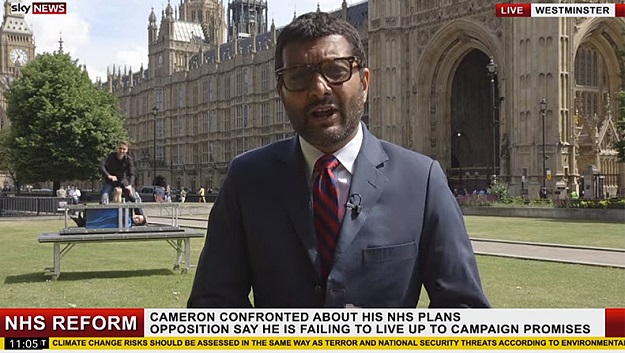 There’s an incredible viral video burning through social media today. If you play close attention to the video below, you can see quirky magicians Young & Strange essentially hijack a live Sky News broadcast by performing a magic trick in the background.

All the while, Sky News reporter Ashish Joshi is completely oblivious to the shenanigans going on behind him as he goes on and on about UK Prime Minister David Cameron’s plans for the National Health Service.

As far as pranks go, this one is certainly hard to top. But as the video began amassing massive amounts of views on YouTube and Facebook, some began to naturally wonder if the whole thing was staged. In turn, Internet sleuths got to work and even began comparing the font used in the video above with the font used in verified Sky News broadcasts.

Eventually, as the video continued to spread like wildfire, Sky News had no choice but to speak up and pour some cold water on what would have otherwise been the greatest videobomb of all time.

What a shame. This clip was primed to become the stuff of legends.