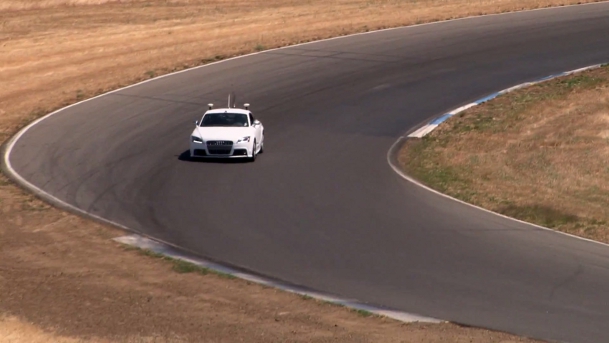 The technology behind self-driving cars can be a bit complicated. Sometimes it helps to have an expert explain tech like this is the simplest terms possible, and that’s exactly what Stanford’s Chris Gerdes did for the Wall Street Journal. Gerdes is the director of the Center for Automotive Research at Stanford, and he and his team built a self-driving race car. The car, an Audi TTS named Shelley, can reach speeds up to 120 miles per hour, and has also given Gerdes a springboard to discuss the three necessities of a driverless car.

The first key to building an autonomous car is actuation — giving the car “the ability to control movement with throttle, brake, gear shifting and more.” Sensors, such as the one’s Sony develops, are also vital to a self-driving car. The car must be able to determine what each and every approaching object signifies, especially lane demarcations, road signs, and pedestrians. Gerdes notes the importance of GPS capabilities as well. The car must know where it is in relation to everything else on Earth, not just its immediate surroundings.

Finally, a self-driving car must have logic. Without logic, the car will be unable to determine what action it should take in any given circumstance. This is by far the most complex aspect of development, and also possibly the most important. Some of the challenges discussed in the article include the ability for a car to signal its intent to other cars and pedestrians crossing the streets, or how to respond to an emergency while causing minimal damage.

The research team is currently working on finding ways to distribute the technology it has developed at Stanford. The dream of affordable, safe self-driving cars by 2020 might be more realistic than many had imagined.