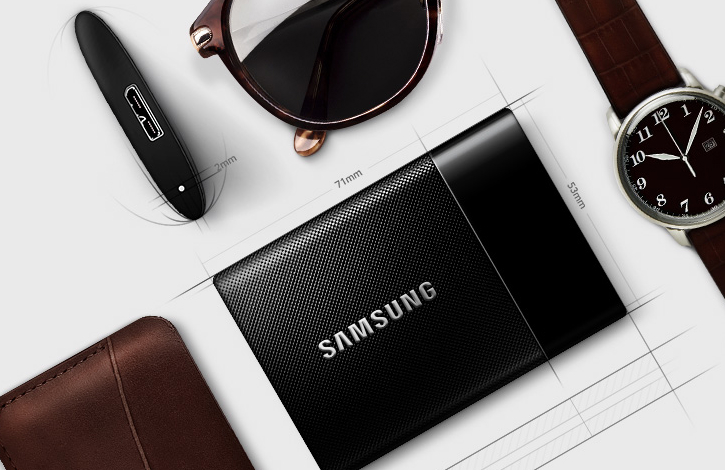 Samsung on Monday announced at CES 2015 a variety of new products including a new line of highly portable storage drives. The new Portable SSD T1 models will offer users access to plenty of storage on the go, in a stylish format.

FROM EARLIER: Video: Meet SmartScooter, the Tesla of scooters

“The write speed is responsive and fast like an internal SSD and up to 100 times faster than an external hard disk drive (HDD),” the company said. “Depending on the file size, the Portable SSD T1 has a data transfer speed four times faster than an external HDD. It takes only eight seconds to transfer a 3GB movie file and 27 seconds for a 10GB movie file compared to an external HDD which takes 26 seconds and 85 seconds, respectively.

The SSD T1 models are also supposed to be highly durable, according to the company, as they should be capable of sustaining shocks up to 1500G/0.5ms. Furthermore, the drive features a Dynamic Thermal Guard, which will be activated in extreme temperature conditions to protect the stored data.

LAS VEGAS, USA – January 5, 2015 – Samsung Electronics, the world leader in advanced memory technology, today unveiled the Samsung Portable SSD T1, a stylish, external portable solid state drive (SSD) that represents a new standard of storage for today’s digital life. Designed for speed and security without sacrificing style, the Portable SSD T1 is ideal for business travelers, creative professionals and content creators with a need for secure local storage they can take on-the-go and use to quickly transfer large amounts of data. Available in 250 gigabyte (GB), 500GB and 1 terabyte (TB) storage capacities, the Portable SSD T1 will launch globally in 15 countries across the United States, European and Asian markets later this month.
Powered by Samsung’s proprietary 3D Vertical NAND (V-NAND) technology, the Portable SSD T1 is a high-performance memory storage device recently chosen as an honoree for the 2015 International Consumer Electronics Show (CES) Innovation Awards. The new drive will be on display at the 2015 CES from January 6-9 at Samsung’s booth, 11906, located in the Central Hall.

“The Portable SSD T1 allows users to store their entire digital portfolio locally in one place, take it with them anywhere and have blazing fast access to their data, all without worrying about reliability or security,” said Unsoo Kim, Senior Vice President of Branded Product Marketing, Memory Business at Samsung Electronics. “Our digital lives demand storage that surpasses the limits of existing options, which require consumers to compromise, when it comes to mobility, capacity, security or performance. The Portable SSD T1 overcomes the drawbacks of alternative options on every major pain point, making it the next external storage device of choice.”

Built for Speed
Built with the same award-winning technology as Samsung’s internal SSDs, the Portable SSD T1 saves users precious time with extremely fast read/write speeds, enabling users to plug in and quickly grab their work to present to prospective clients or partners. In fact, the drive has sequential read/write speeds of up to 450 megabytes per second (MB/s) with a USB 3.0 super speed interface and random read/write speeds of up to 8,000 inputs/outputs per second (IOPS) and 21,000 IOPS respectively. The write speed is responsive and fast like an internal SSD and up to 100 times faster than an external hard disk drive (HDD). Depending on the file size, the Portable SSD T1 has a data transfer speed four times faster than an external HDD. It takes only eight seconds to transfer a 3GB movie file and 27 seconds for a 10GB movie file compared to an external HDD which takes 26 seconds and 85 seconds, respectively.

Secure, Durable Local Storage
With its intuitive user interface, the Samsung Portable SSD T1 is easy to set up and protect, so professionals can be assured that their original work will not fall into the wrong hands or get lost due to design, durability or reliability concerns. With just one user-set password, the drive is safe from unwanted access thanks to AES 256-bit hardware encryption. Unlike an external HDD, the Portable SSD T1 has no moving parts, so it can withstand bumps and drops and users do not need to worry about the wear and tear on moving parts that can result in lost or corrupted data. It is shock resistant up to 1500G/0.5ms and features Dynamic Thermal Guard, which will activate in extreme temperature conditions to protect the drive and any stored data – so users can rest easy knowing the drive can withstand even the toughest elements.

Stylishly Designed for Maximum Portability
The Portable SSD T1 has a slim and compact design that makes it easy to take anywhere. Smaller than an average business card and weighing about 1 ounce, it features premium aesthetics such as black chrome metal coating and laser patterning, making it the sleek, fashionable choice for sophisticated and stylish users.

The Samsung Portable SSD T1 works effortlessly with both Windows and Mac PCs using the exFAT file system, eliminating the hassle of having to reformat for every type of computer. Each unit of the Portable SSD T1 comes with a three-year limited warranty, and is available in 250GB, 500GB and 1TB with a starting price of USD 179.99. For more information, please visit http://www.samsung.com/T1.