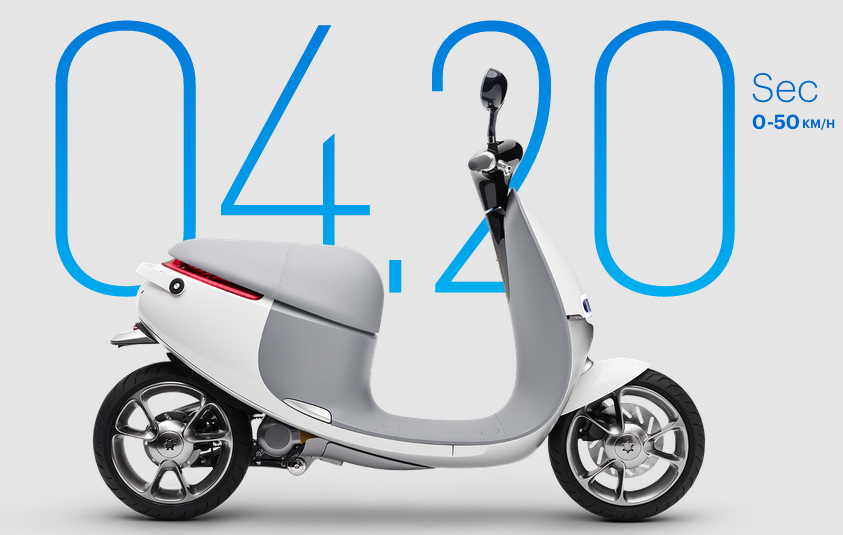 CES 2015 is getting underway in Las Vegas, and while many companies have yet to unveil their tech creations for this year, one product will certainly turn quite a few heads. It’s not a smartphone, it’s not a wearable device with miraculous new abilities and it’s not an amazing 8K TV. Instead, it’s a kind of device that you wouldn’t expect, an electric scooter called the Gogoro SmartScooter.

The scooter is supposed to offer users a better, smarter, eco-friendlier and potentially cheaper experience than other scooters or transportation methods. The most interesting feature of the Gogoro SmartScooter is its electric battery, which can be swapped out at special charging stations with the engine still running.

The preloaded app will tell users when the battery needs to be recharged, at which point they’ll be directed to the nearest charging station — Gogoro’s Energy Network modular battery-swapping station looks like a vending machine ready to dispense fresh batteries — to swap out batteries in just six seconds. By paying a monthly subscription, users will be able to access as many batteries as needed.

The scooter features a G1 Motor whose components are “precision-engineered to ensure the entire system works smarter, stays cooler and goes further in the most efficient way possible,” an “ultra lightweight and incredibly strong” Areoframe monocoque chassis, high-performance suspension “inspired by jet-fighter landing gear in the front and multi-link suspension in the back,” and a smarter balance and agility system.

The scooter can accelerate from 0 to 31mph in 4.2 seconds and has a max speed of 60mph. Traveling at a constant 25mph speed will get users some 60 miles out of the scooter’s two batteries.

Additionally, 30 on-board sensors help out with the SmartScooter’s smart features.

The price of the SmartScooter has yet to be unveiled though, but Gogoro’s co-founder and CEO Horace Luke told Engadget the scooter won’t be as expensive as users won’t actually be buying the batteries — apparently, actually buying the batteries of the device isn’t possible. A launch date for the GoStations and SmartScooter isn’t available just yet.

A video showing the SmartScooter follows below, with the full press release, and Gogoro’s official site detailing all the features of the scooter available at the links in the source section.