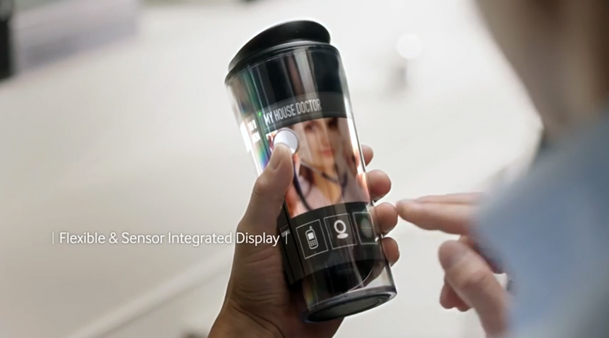 Samsung’s display arm envisions a future where just about everything you see and touch — from the walls in your house and the floor you walk on to your car windows and coffee mugs — is a display powered by Samsung’s software and services. In a video from the company’s analyst day in late November that is now making the rounds, Samsung Display laid out its vision of a world where anything and everything is a display. Users still carry some connected devices, but biometric fingerprint scanners embedded in every device allow people to touch just about anything in order to access their data and services. Of course everything is also connected to surrounding devices wirelessly; in one example, a woman in a cafe gets a video call on her smartwatch but transfers it to a transparent screen in the window beside her table.

Before displaying her call, by the way, that window was serving up a giant advertisement for a sale at a clothing store, so apparently we have that to look forward to…

On one hand, Samsung Display’s vision of the future probably isn’t that far off in a number of ways: soon, everything will be connected. It’s also pretty terrifying though, in that it depicts a world where it’s impossible to escape all of this technology and connectivity for even a moment.