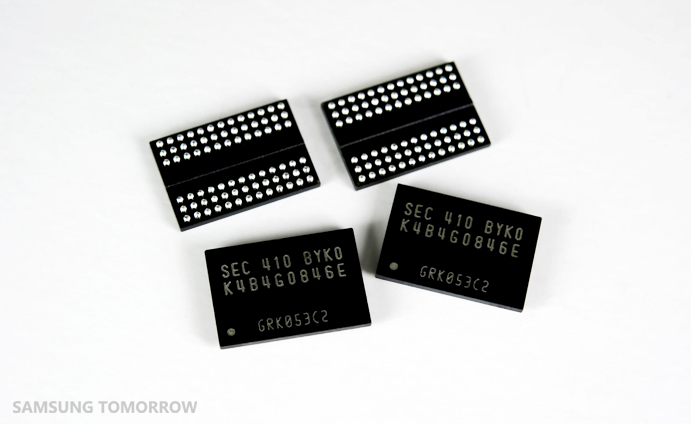 Samsung on Tuesday announced on its blog that it’s now mass-producing the “industry’s most advanced” 4-gigabit (Gb) DDR3 DRAM memory which is based on a new 20-nanometer process. The new memory will be available for mobile devices and PCs later this year, Samsung confirmed, without specifying which of its upcoming mobile devices will get the new chips.

“Samsung’s new energy-efficient 20-nanometer DDR3 DRAM will rapidly expand its market base throughout the IT industry including the PC and mobile markets, quickly moving to mainstream status,” Samsung Electronics executive vice president of memory sales and marketing Young-Hyun Jun said. “Samsung will continue to deliver next-generation DRAM and green memory solutions ahead of the competition, while contributing to the growth of the global IT market in close cooperation with our major customers.”

According to the company, the new memory is 25% more energy efficient than 25-nanometer memory, with Samsung saying it has improved manufacturing productivity by 30% compared to the previous models.

The company also bragged with the way it’s actually making the new memory modules. “Samsung has pushed the envelope of DRAM scaling, while utilizing currently available immersion ArF lithography, in its roll-out of the industry’s most advanced 20-nanometer (nm) 4-gigabit (Gb) DDR3 DRAM,” the company wrote in the press release. “With DRAM memory, where each cell consists of a capacitor and a transistor linked to one another, scaling is more difficult than with NAND Flash memory in which a cell only needs a transistor. To continue scaling for more advanced DRAM, Samsung refined its design and manufacturing technologies and came up with a modified double patterning and atomic layer deposition.”

Samsung said this new technique, combined with the “ultrathin dielectric layers of cell capacitors with an unprecedented uniformity” it has created resulting in higher cell performance, will also help it mass produce the next-generation 10-nanometer memory.

UPDATE: Samsung contacted us to point out that the new DDR3 chip will be available for “desktops, notebooks ulltrabooks and tablets (and later servers), but not smartphones.”