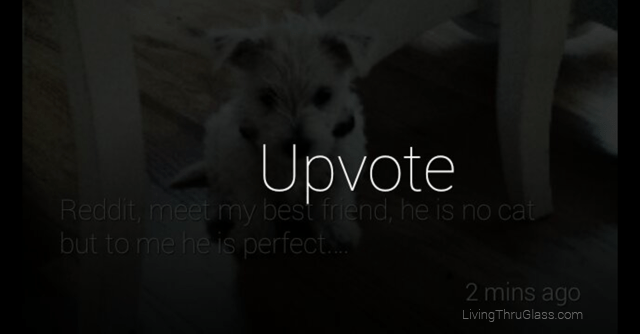 If you thought Google Glass was a major potential distraction before, just wait until Glass users start spending hours getting cute cat pictures projected onto their eyeballs. Developer Malcolm Nguyen has created his own homemade Reddit app for Google Glass that includes the top 25 posts from your own Reddit front page and refreshes every hour. It also gives users the ability to vote posts and comments up or down, and the ability to both share links and to leave your own comments.

Nguyen says that he designed the Glass app for Reddit fans who are stuck at work and who want to “get pictures of cats and memes and gonewild beamed directly to your face without anyone suspecting a thing.”

Although we admit the thought of people sitting around at parties staring off into space as they vote up cat pictures without talking to one another is terrifying, we find ourselves relieved that Nguyen hasn’t yet developed the ultimate harbinger of society’s destruction: A Google Glass app for trading Bitcoins.