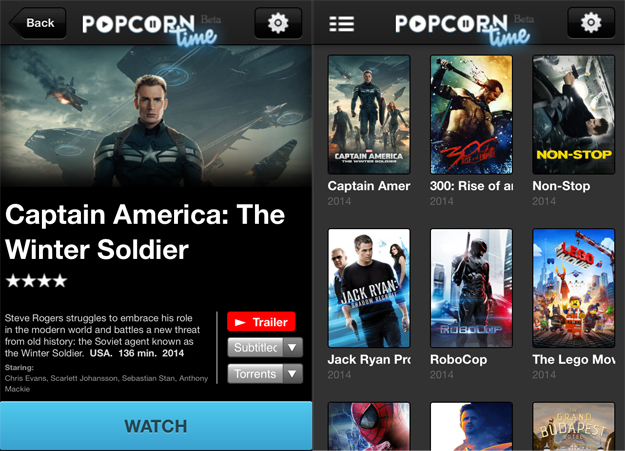 Movie and TV show pirates, this is the moment you’ve been waiting for: Popcorn Time is finally available for the iPhone, iPad and iPod touch. Of course, there’s a catch… you’ll need a jailbroken device in order to access and install it.

Popcorn Time started as a desktop app that offered a unique twist on video torrents. Instead of using one piece of software to find torrent files, another to download them and a third to watch whatever movie or TV show was downloaded, Popcorn Time offered users a sleek Netflix-style app that was able to search, download and view videos all in one tidy package.

Then, Popcorn Time went mobile this past summer with a great Android app that took all of the features users loved in the desktop version and shrunk them down to tablet and smartphone size.

Unfortunately, an iOS app proved to be a trickier task to tackle.

Now, however, iOS device owners can finally get in on the action thanks to the release of Popcorn Time for iOS, which is available immediately for jailbroken devices and can be downloaded by adding Popcorn Time’s dedicated repository to Cydia. Details can be found by following the link below in the source section.

Of note, the developers behind Popcorn Time confirmed to BGR that they are working on a solution for iPhones, iPads and iPod touch handhelds that will not require a jailbreak. No other details are available at this time, but it is likely safe to assume that we’re looking at a browser-based solution, since there is no way Apple would ever approve a Popcorn Time iOS app for distribution in the App Store.

A few screenshots of the brand new Popcorn Time app for jailbroken iOS devices follow below.