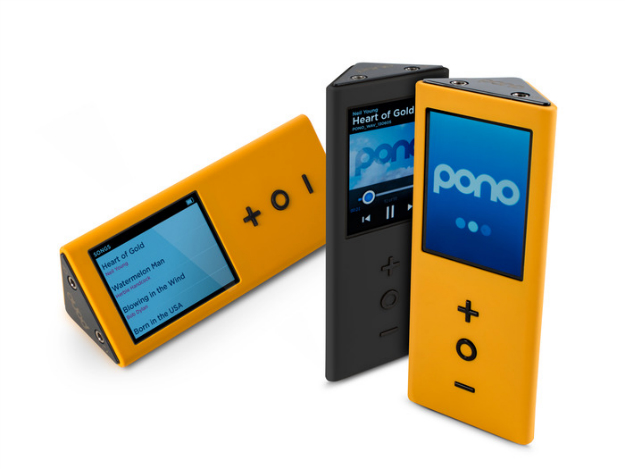 PonoMusic’s PonoPlayer is a Neil Young-backed music player that has smashed through its $800,000 Kickstarter funding goal in less than a day – it’s currently at over $1 million in pledges from over 3,300 backers, with 34 days to go until the campaign ends – and seems to be the next iPod killer. According to the team behind it, PonoMusic aims to deliver a better listening experience than regular MP3 players, but the device will also be quite expensive.

“PonoMusic is an end-to-end ecosystem for music lovers to get access to and enjoy their favorite music exactly as the artist created it, at the recording resolution they chose in the studio,” the company wrote on Kickstarter. “We offer PonoMusic customers the highest resolution digital music available. PonoMusic is more than just a high-resolution music store and player; it is a grassroots movement to keep the heart of music beating.”

The Toblerone-shaped PonoPlayer will get music from a PonoMusic.com store that can be synced with the device by connecting it to a computer. After that, the MP3 player can be used with regular headphones, but it also has a special jack for connecting it to a home or car audio system.

The PonoPlayer’s best feature is music tracks quality, at least according to the team. A PonoMusic file will have “about 6 more musical information than a typical MP3 file,” according to the company. “With ultra-high resolution recordings (192kHz/24 bit), the difference between a PonoMusic digital file and an mp3 is about 30 times more data from which your player reconstructs the ‘song.’”

The PonoPlayer will sell for $399 when it launches, with the cheapest Kickstarter price being $200 – however, the Early Bird deal is long gone, and currently there are several full-price options for backers interested in purchasing it. The PonoPlayer will ship at some point in October.

The following video offers more details about the PonoPlayer and its music playing abilities.