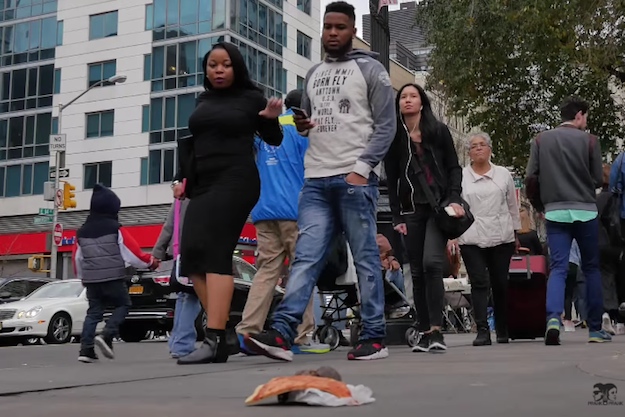 This past September, a rat with an appetite for New York style pizza became an Internet celebrity when a video emerged showing the creepy little creature dragging a slice of pizza through an NYC subway station. The original video currently boasts more than 8.3 million views and, as tends to be the case with viral videos, spawned an endless number of spoofs, including this solid effort from Jimmy Kimmel.

And now, just when you thought it was finally safe to go back on the subway, some enterprising pranksters from the YouTube channel PrankvsPrank put together a robotic version of the pizza rat in order to scare the bejesus out of New Yorkers in Union Square and Times Square.

The end result is just as hilarious as you’d expect. While some folks clearly recognize that it’s a gag, others are legitimately terrified. One highlight worth mentioning is when someone starts chanting “Go pizza rat, go pizza rat go!”, a subtle yet clever reference to Vanilla Ice’s forgettable single “Go Ninja Go” from the 1991 film Teenage Mutant Ninja Turtles II: The Secret of the Ooze.

All in all, you can’t help but laugh at what is really just some old-fashioned robotic rat fun in NYC. It’s almost cliché, really.

Per usual, there is some comedic gold to be had in the video’s YouTube comments, with the top-rated comment reading: “You see a rat, I see a father trying to feed his 4 turtles.” Another quip reads: “it’s all fun and games until someone falls down onto a subway track.”

Which is a actually a really good point.