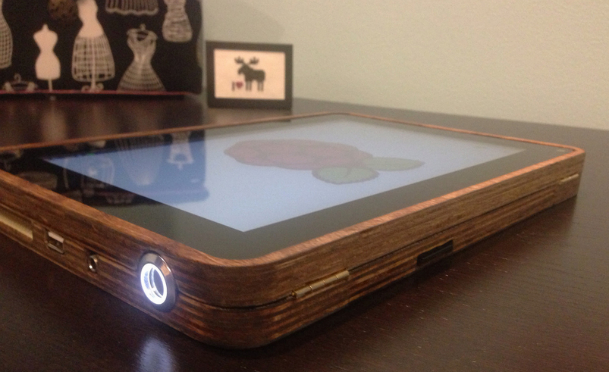 The PiPad is the name Michael Castor gave to the Raspberry Pi wood and carbon fiber tablet he built after gathering all the necessary parts. “It seems that every day a manufacturer comes out with a new tablet computer. Thinner, lighter, faster, but it seems that they all look about the same and accomplish roughly the same thing, Castor wrote on Makezine. “When I set out to build my Raspberry Pi tablet I wanted something different. I wanted an all-in-one system that was usable, portable and Linux-based.”

Another factor important to Castor was the actual design of the tablet, as he planned to use the PiPad during flights, without “freaking out” the TSA. Castor ended up choosing Baltic birch plywood for the PiPad’s frame and carbon fiber for the basis of the frame. The most difficult task was finding a 10.1-inch touchscreen display running off 5V like the Raspberry Pi. The tablet also packs a 10,000mAh battery that can be charged from a cell phone charger and offers about six hours of life. The whole project cost $350, and the PiPad has been autographed by Raspberry Pi’s Eben Upton, who was also impressed with the device at the Maker Faire New York event. “I could have bought an iPad or an Android tablet for that (or less) but what’s the fun in that?” Castor told The Register.

Castor did not have any problems getting the PiPad through airport security, and his device was admired by a flight attendant only because it played a movie she liked. More images showing the PiPad are available below (via Flickr).