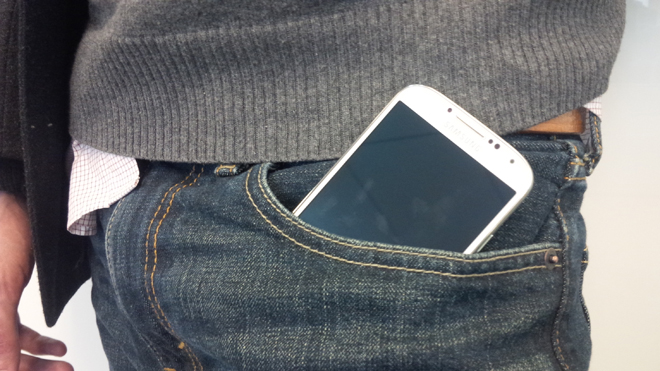 As supersized smartphones from Samsung continue to get more and more unwieldy, it’s not just rival handset makers that are being forced to rework their offerings in response. A recent report draws attention to an interesting phenomenon brought on by the phablet craze currently sweeping the world: Smartphones have become so massive that clothing companies actually have to reengineer their pants in order to accommodate these huge new handsets.

“We recently increased the size of our ‘coin pocket,’ which is the pocket-within-the-pocket on the wearer’s right, from 3×3 to 4×4 to accommodate today’s larger phones,” Dockers vice president of global design Doug Conklyn told FoxNews.com during an interview. One of several clothing companies that spoke to FoxNews.com, Dockers also said it had to rework a concealed “Mobile Pocket” on some of its Khaki pants in order to accommodate growing smartphone sizes.

Samsung, the leader of the phablet revolution, first introduced the supersized Galaxy Note with a 5.3-inch display in 2011. Phablet displays have gotten much larger than that in recent months, and Samsung again topped the charts in April when it debuted its new “Galaxy Mega” smartphone line with available 5.8-inch and 6.3-inch displays.