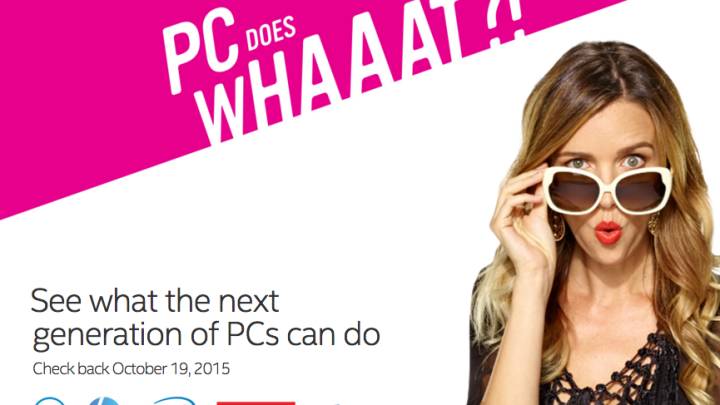 Back in the day when Apple was trying to reaffirm itself in the computer business and convince buyers that Macs were better than PCs, the company came up with a slew of Mac vs. PC ads that were just hilarious. But times have changed, Apple dropped the campaign, and the current computer business looks nothing like the one from last decade. Smartphones are dominant in this “post-PC” era, and laptop and desktop makers are struggling against a marked demand decrease – interestingly, the Mac is now doing a lot better than PCs in terms of profitability.

So Microsoft does whaaaaat?

On top of launching an excellent series of new Surface-branded devices, including the Surface Pro 4 and the Surface Book, Microsoft partnered up with four other major players in the PC business, including Intel, Dell, HP and Lenovo for a new ad campaign that wants to promote the PC as this fantastic new tool that can perform impressive new tricks and look good in the process. You know… things you apparently don’t expect from a PC.

The five giants have new commercials that will try to show you what a PC can do. Titled PC Does What?, the campaign will kick off October 19th, Business Insider reports, but some short clips are already available.

Even though this technically isn’t a PC vs. Mac commercial and the ads don’t name Apple or its products, they seem to highlight certain features that aren’t available on Macs, like touchscreen support that turns them into Windows tablets, 360 screen rotation and bezel-less displays. But these appear to be the only advantages a PC might have when compared to a Mac.

All the ads include the same catchphrase, which might become annoying the more you’ll hear it on TV: “PC Does What?” characters ask, somehow incredulous of what the PC can do today.

Of course, anyone who’s familiar with computers of any kind – be it a smartphone, tablet or PC – will likely not ask that question. And if any existing PC user will actually be awestruck by some of these features – dependable battery life, great graphics and sound, impressive displays, dependable build quality and design – then it simply means that the PC makers screwed up consistently over the years, offering sub-par performance and designs, and training buyers to expect mediocrity from new PC releases.

If all else fails, Microsoft is also still ready to reward you with cold-hard cash for your PC upgrade decision.

The PC Does What campaign, airing soon on a TV near you, will feature some of the following clips.