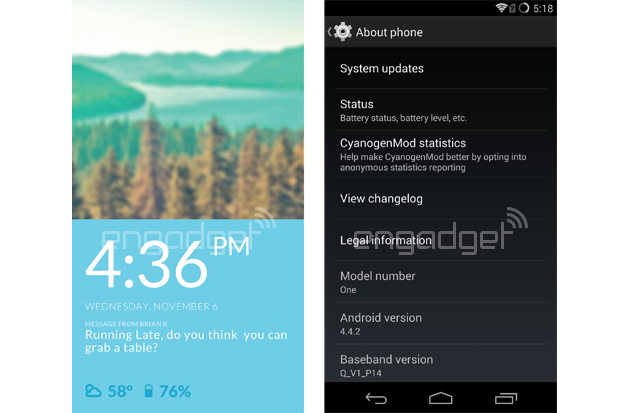 Even though OnePlus revealed some of the One’s hardware details – it’s one of the most exciting Android handsets so far – it revealed precious little about what CyanogenMod 11S, the official operating system of the handset, will have to offer. The company did reveal that Cyanogen Inc will support the OS for two years, that it will offer voice-based controls and that users will be able to install any software on the device other than CyanogenMod without breaking the warranty, if they so desire. The company has also confirmed that the One will get some special CyanogenMod software features, without revealing any of them. It also did not post any images showing the operating system’s interface and custom features.

However, Engadget has published two purported screenshots showing CyanogenMod 11S (based on Android 4.4.2 KitKat) running on a One device. Apparently, CyanogenMod 11S is what the OnePlus One’s OS is called so far, according to a reliable tipster.

The lock screen image shows the clock, date, weather, battery level and recent text messages, but does not feature an unlock screen slider. Furthermore, the settings screen features on-screen buttons suggesting the phone will not have physical buttons – a recent leak claimed the OnePlus One will offer users a choice between virtual and hardware buttons.

The OnePlus One will be officially unveiled on April 23, and will cost less than $400 once it hits stores.