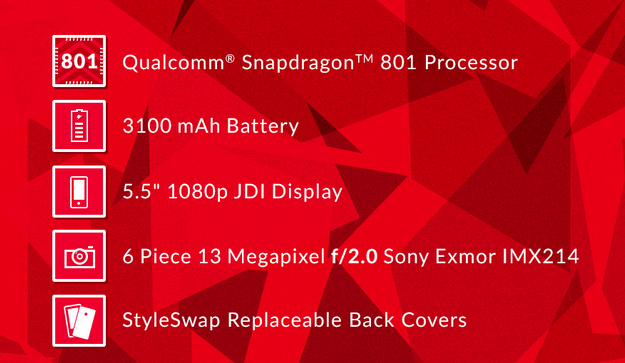 After explaining its decision to choose a Qualcomm Snapdragon 800 processor instead of a newer model for its One smartphone, OnePlus has quietly announced via Facebook that its handset will actually ship with a better processor. The company has updated the cover photo on its social accounts including Facebook and Google+ with a new image that lists the Qualcomm Snapdragon 801 processor among the revealed specs of the phone.

The company has not commented on why it chose to upgrade the processor, and did not say whether this choice will affect in any way launch plans or prices – previously, OnePlus announced the handset will ship in the second quarter of the year, with prices starting at less than $400.

Interestingly, CEO Pete Lau posted a detailed explanation on why OnePlus chose the Snapdragon 800 processor instead of a newer device, when it first announced this particular hardware detail.

“We spent countless hours trying out the latest CPUs. Ultimately, it was clear that the Snapdragon 800 provided the best speed, battery consumption and heat management. It also allows us to get our product in your hand faster, with the highest optimization. We didn’t want to announce our product, only to be able to ship it six months later,” Lau wrote.

“Are there newer CPUs on the market? Yes, and the higher number may have given us a slight marketing advantage while not providing any noticeable change in performance. But ‘Never Settle’ doesn’t mean we tip the scale to one extreme, and let our users suffer the imbalance. We’re completely confident that this is the best choice to deliver a product with the best overall user experience and performance on time for Q2.”

A similarly detailed explanation for the change of heart regarding the OnePlus One’s processor is not available.

Competing devices including the Galaxy S5 and HTC One are confirmed and believed, respectively, to be powered by a Qualcomm Snapdragon 801 processor. Both devices are expected to launch in various markets in the following weeks.