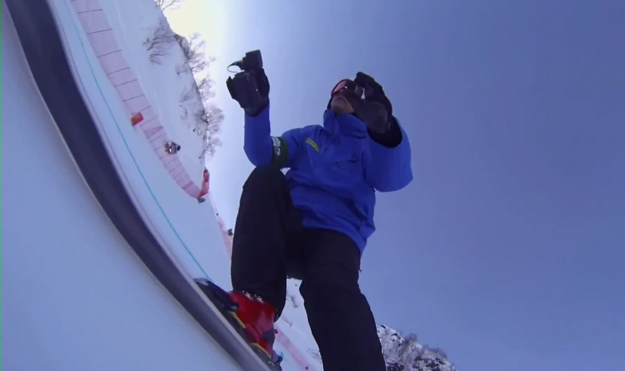 Last week we showed you the most terrifying GoPro video of all time, which had just been made available in high-definition for the first time ever. The video showed us what it’s like to free-fall to the Earth from space, filmed by a GoPro camera strapped to Felix Baumgartner as he made his famous space jump in 2012. While it’s hardly as crazy as falling from space, a newly filmed high-definition video posted over the weekend by BBC’s Graham Bell gives us a first-hand view of what it’s like to ski the Rosa Khutor men’s downhill course, which U.S. Olympic gold medalist Bode Miller recently said is so intense that it “could kill you.”

Olympic skiers on the course have hit speeds of more than 80 mph and as Business Insider noted, two Olympians narrowly missed serious injuries when they each wiped out during practice runs. Watching Bell’s video shows us why.

Bell equipped himself with two GoPro cameras to film the run. One was a handheld unit that he used to give viewers a first-hand perspective, and the second was attached to one of his skis, thus giving viewers a look at Bell as he navigated the course.

“If you are not totally focused and paying attention, this course can kill you,” Bode Miller said of the course while speaking with BBC.

The amazing amazing video of Bell’s run is embedded below.