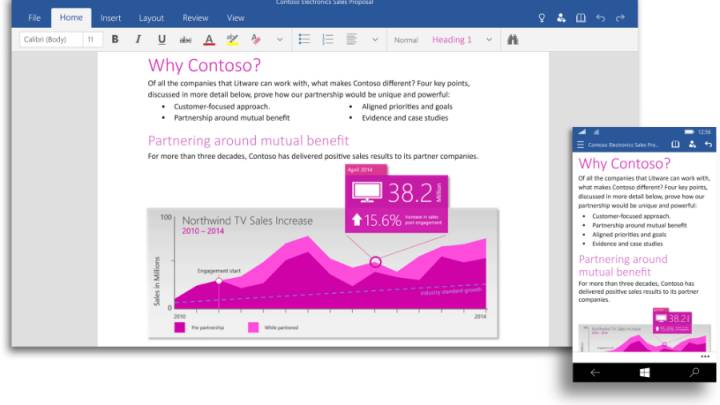 Microsoft on Thursday confirmed various details about its upcoming Office plans, revealing that Office 2016 will be released at some point in the second half of the year, and that Windows 10 mobile devices, including smartphones and tablets will get a special Office for Windows 10 version that’ll be similar to what’s currently available on iPad and Android tablets. Furthermore, Microsoft said that Office for Windows 10 will be preloaded for free on Windows Phones and Windows 10 tablets with screens smaller than eight inches.

FROM EARLIER: Microsoft’s next major Office release set for later this year

Additionally, Office for Windows 10 apps will be available in the Windows Store for Windows devices with larger touchscreen displays.

As ZDNet points out, it’s not clear whether these apps will be available as completely free downloads, or whether users will have to purchase an Office 365 subscription to unlock the full features of Office for Windows 10.

The first public preview versions of the touch-first Office apps for Windows will be rolled out at some point in the coming weeks, alongside the upcoming Windows 10 Technical Preview release.