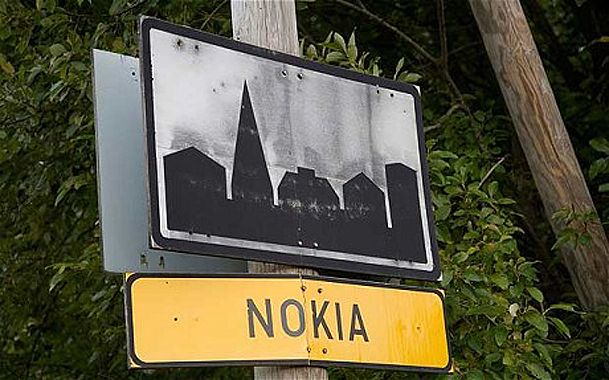 Over the past 600 years, the tiny town of Nokia, Finland has flirted with greatness twice… only to see “Nokia” become extinct twice, first as a silky smooth mammal coveted by czars, then as a sleek consumer electronics product that helped shape the mobile phone industry.

Today, Nokia is in turmoil because somebody has been replacing “Nokia” signposts with “Microsoft” signs, reports Nokian Uutiset (Nokia News). The clearly annoyed traffic expert Kari Korpela states that actions like these are classified as misdemeanors and will lead to penalties once the perpetrator is caught.

The town of Nokia is short on humor right now. Hundreds of years ago, it was the center of a lucrative luxury trade as it sold sable furs to the empire of Novgorod. The word “Nokia” means “Black” or “Sooty,” and was used to describe the sable in order to avoid invoking its true, sacred name. Greedy Nokia residents hunted the sable to extinction.

Nokia started its slow return to global prominence when a pulp mill called Nokia was founded there in 1865. Forty years later, Finnish Rubber Works set up a factory in Nokia. In 1967, the pulp mill and the rubber factory merged and the modern Nokia corporation started its move towards cable manufacturing.

But later on, Nokia opted to establish its handset manufacturing in the town of Salo, more than 100 miles away. The town of Nokia was left with only the Nokia mansion, where the millionaire executives gathered to party occasionally, hiring locals to serve them champagne and reindeer tongue. Having missed the upside of Nokia’s exuberant halcyon days, the bitter citizens of Nokia are now stuck with a name that is associated with corporate dysfunction and decline.

No wonder vigilantism has started rearing its head.