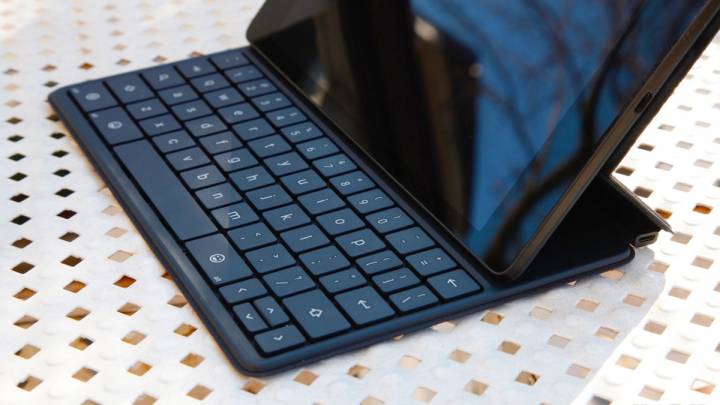 I was a big fan of the Nexus 9 tablet when I reviewed it back in November. In fact, I said that unless you need the awesome productivity features afforded by the Galaxy Note 10.1, the Nexus 9 is likely the only Android tablet you should consider buying.

At the time, I also briefly mentioned a nifty optional accessory called the Keyboard Folio. It was only mentioned briefly because it wasn’t available back in November, but now Google has sent a unit to me for review and I was finally able to spend a significant amount of time with it.

Does this $130 keyboard cover tip the scales in Google’s favor when it comes to productivity?

Samsung’s Galaxy Note 10.1 has two selling points. The first is the gorgeous 10-inch display that is among the best you’ll see on a tablet. The second is the S Pen stylus and associated software suite that focuses on productivity and multitasking.

Google’s Nexus 9, on the other hand, wasn’t designed with productivity as a priority. The tablet is more of a jack of all trades that is a solid premium option for users looking for an Android tablet.

The Keyboard Folio changes things a bit, however.

Think of the Keyboard Folio as Google’s answer to the Type Cover for Microsoft’s Surface line of tablets. The accessory connects to the Nexus 9 and looks to provide a laptop-like experience. The question, of course, is whether or not it succeeds.

The cover is easy to connect thanks to NFC and Bluetooth. It attaches to the Nexus 9 magnetically and consists of three main pieces. The back portion looks like the front of Apple’s Smart Cover for the iPad, the front piece holds the keyboard, and the spine connecting them is home to a battery and a microUSB charging port.

Of note, Google says the Keyboard Folio lasts for up to five months on a single charge.

The keyboard can be used in two different positions, and they are adjusted by changing the number of magnetic panels stuck to the back of the tablet.

The result is a fairly versatile setup good for use on a desk or a table or in your lap.

As for the typing experience, it’s much better than you would expect from a device that’s about two-thirds the size of a standard computer keyboard.

Here are my stream-of-consciousness notes from when I first connected the device to my Nexus 9. They are unedited and were typed using the Keyboard Folio cover.

This is a typing test on the Nexus 9’s keyboard cover. It’s actually not bad, though you can tell right away that the keyboard is much more cramped than a normal laptop keyboard. At the same time, I think I’m immediately finding that I actually type almost as fast on this keyboard as I do normally. Although I will say that it’s much more difficult to correct mistakes. I keep missing the delete key when I reach for it, which is very annoying. That will probably get better over time.

Overall, it’s really not bad. I could definitely see leaving my computer at home and using this instead to take notes at meetings. And on flights or in other cramped spaces it will be fantastic.

The biggest problem I have is that sometimes, as I reach for certain keys, a finger will accidentally tap the display on the Nexus 9. Also annoying is the fact that this rogue tap always seems to land on the app switcher key. It would have been nice if the case positioned the tablet a little bit further away from the keys.

I’m now finding that changing the tablet to the second position supported by the case seems like it makes a big difference and I haven’t accidentally tapped the display since adjusting the angle. It’s also very easy to switch between the two positions, which is cool.

The other thing that’s really nice is that, like other tablets with removable keyboard covers, the keys don’t work when the cover is folded all the way open so the keyboard keys are flat against the back of the tablet, facing the opposite direction. This is a necessity to avoid accidental key presses, and it works great with this cover.

On the flip side, the tablet’s virtual keyboard doesn’t appear at all while the keyboard cover is connected, even when it’s folded back or completely detached from the tablet. Though this is an issue with all Bluetooth keyboards, it’s still a big drawback.

Overall, as was the case when I tested this keyboard cover for a short while a couple of months ago, I’m a fan.

I used the device for several more hours after those quick notes were made, and my opinions remain unchanged. The Folio is a great value-add and it’s surprising how fast one can type on the device.

As to the notion shared by some pundits that a keyboard cover like this is the missing link between iPads or other tablets and laptop-like productivity… no, no, no.

The problem is the software, not the hardware.

On a tablet, you can do just about everything you can do on a laptop. The problem is the environment and the workflow — Android and iOS just aren’t as conducive to productivity as Windows and OS X. You can’t fly around between apps as effortlessly, and you can’t perform complex functions as easily.

Someday, perhaps the gap will narrow and tablet platforms like Android and iOS will support work as well as they support play. Perhaps I’ll be able to effortlessly work in three different programs at the same time while sharing data between them instantly.

With a device like the Keyboard Folio, though, the Nexus 9 is instantly transformed into the perfect device for light productivity on the go or in cramped spaces. It’s not a real laptop replacement, but it absolutely gets the job done if you’re willing to make the aforementioned compromises.

Google’s Keyboard Folio for the Nexus 9 costs $129.99 and it’s available right here, or it will be once it’s back in stock.