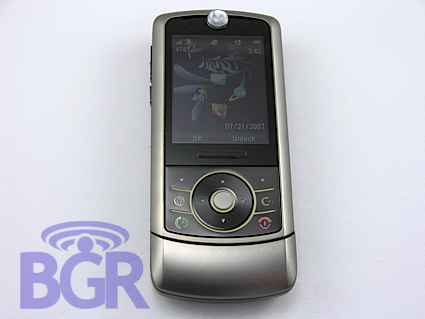 Tsk tsk, Motorola…You really should get a handle on your leaks. Here we’ve got the Motorola “Marco” which is in Z-slider form. The difference with unit is that it incorporates charging contacts on the back of the device, a nice addition, and above all — WiFi! Yes sir, WiFi is in full effect. This is Motorola’s first real phone (not counting smartphones, or the ill-fated Motorola CN920 which was an outsourced project that never materialized) with WiFi and it runs atop a JUIX operating system with a couple nice visual enhancements. The actual phone functioned fine, but we weren’t able to test the WiFi on T-Mobile’s network, yet it connected fine to our Linksys WRT350N router. You’ll the inside specs lookin’ pretty much like its Z3 sibling with quad-band GSM/EDGE connectivity, a 2 megapixel camera, and the same form factor but, this unit seems a little thicker — just a bit! Release has not been speculated on, but we’re hearing the RAZR 2 is going to be Motorola’s big push this year, and not to expect too much in a major commercial release of a new product until at least January of ’08. Whatevs, that won’t stop us though! We the best!

Click on over to our full Motorola Marco gallery!