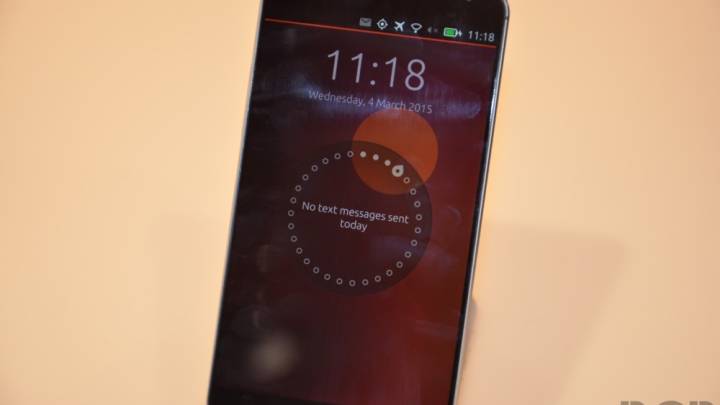 The mobile ecosystem is dominated by Android and iOS, with several other operating systems fighting for scraps. The battle for third place might already have Microsoft as a winner, but there are plenty of others that could become interesting mobile OS alternatives.

One of them is Ubuntu, which could grow up to be a more than decent Android rival.

At MWC I was able to play with not just one, but two different Ubuntu phones at Canonical’s booth, including the weirdly named Aquaris E4.5 Ubuntu Phone — the first Ubuntu phone in the world — and Meizu MX4, an Android device that will apparently also be available with Ubuntu.

And while Ubuntu phones seem to be interesting, it’s definitely not a better option than Android — at least not yet.

The great thing about Ubuntu is that it’s trying to change the perception we have of smartphones and mobile user interfaces. Although, at the same time, it delivers an experience that’s going to feel familiar to anyone who’s already a smartphone user. Or at least it’ll let those users adjust to a completely new mobile OS with relative ease.

If you already know how iOS, Android or any other mobile OS works, you’ll quickly get the hang of Ubuntu’s main features. There are no home buttons, or main menus, but Ubuntu still has a touch-based interface with simple but vivid colors and fluid visual effects that’ll somehow feel familiar.

You still get various home screens, apps and settings menus, so navigating through them shouldn’t be a problem. There’s also an app store that seems to have enough apps in it to get you going.

What’s changed, compared to many other mobile platforms, is the way you initiate actions on the device. Ubuntu takes advantage of all the phone’s edges to launch certain things, whether that’s switching tasks or accessing a list of favorite apps. A simple swipe from any edge will bring up a certain menu that gives you access to certain options and makes moving between apps a breeze. An Ubuntu phone walkthrough video (available below), shows all the gestures and UI Canonical has devised.

The OS looks rather refreshing, and the overall experience feels great. With the right kind of marketing and muscle behind it, Ubuntu could become a great mobile platform.

But there’s a huge “but” that would make me want to stay just friends with Ubuntu for now, rather than moving further: there’s no real compelling hardware to make Ubuntu a success. The current handsets are far from Canonical’s phone dream — the one that had a huge crowd-funding goal which Ubuntu never hit. Furthermore, it’s not even clear how quickly you can get your hands on one, and how much support you’re actually getting for your buck.

Finally, the most interesting version of the two — the Meizu MX 4 — isn’t even running Ubuntu officially yet, and it’s not clear in what markets it’ll be available at first. The device packs a 5.3-inch 1080p display, 2.2GHz octa-core MediaTek processor, 2GB of RAM, up to 64GB of storage, LTE, 20.7-megapixel camera and 2-megapixel front-facing camera.

There is one good thing about Ubuntu though — you might be able to install it with ease on some of the existing Android-based devices. Though that’s not something all smartphone users might be interested in.

As interesting Ubuntu might be to play with at this time, it doesn’t seem like it’s got the power to really take on its rivals just yet.

Hands-on pictures of the two handsets Canonical had on display at MWC 2015 follow below.