Over the weekend, it came to light that PayPal co-founder Peter Thiel recently donated $1.25 million to Donald Trump’s Presidential campaign. Thiel may not be a household name, but he became more widely known earlier this year when it was revealed that he was personally bankrolling Hulk Hogan’s aggressive lawsuit against Gawker.

Thiel also happens to be a board member at Facebook, and given his political leanings to the right, Facebook has recently been criticized harshly for allowing Thiel to maintain his seat on the board. Especially given the recent controversy surrounding diversity in Silicon Valley, many take the position that Thiel’s presence on Facebook’s board is unseemly, to say the least.

Addressing the matter, Facebook CEO Mark Zuckerberg defended Thiel’s position as a board member in an internal post sent around on Facebook. A screenshot of the memo recently leaked on Boing Boing.

I want to quickly address the questions and concerns about Peter Thiel as a board member and Trump supporter.

We can’t create a culture that says it cares about diversity and then excludes almost half the country because they back a political candidate. There are many reasons a person might support Trump that do not involve racism, sexism, xenophobia or accepting sexual assault. It may be because they believe strongly in smaller government, a different tax policy, health care system, religious issues, gun rights or any other issue where he disagrees with Hillary.

The full note can be seen below. 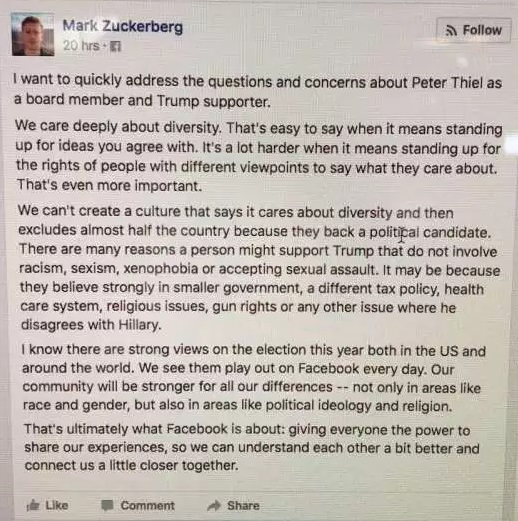 All things being equal, it’s a fairly reasonable well thought out letter. Still, given Zuckerberg’s enthusiasm for diversity, we’d be remiss if we didn’t point out the following tweet.