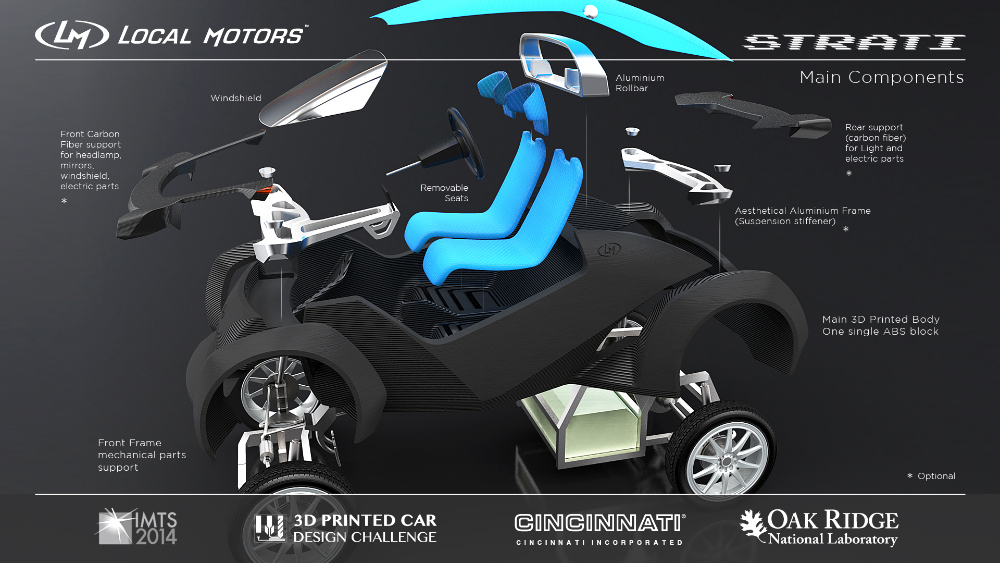 While some people have successfully 3D printed buildings, others have taken the same approach to the car manufacturing business, as a company has just come out with a car called the Strati that’s the first 3D-printed car in the world. Scientific American reveals that it took Local Motors only 45 hours to build the Strati, a two-seater “neighborhood” electric car that has a range of up to 120 miles and a maximum speed of 40 mph.

Interestingly, the company plans to start selling Stratis for anywhere between $18,000 to $30,000 later this year, as it further refines its 3D-printing procedure.

“We expect in the next couple of months [printing a complete car] to be below 24 hours and then eventually get it below 10 hours, [down from 45 hours currently]” Local Motors CEO John Rogers said. “This is in a matter of months. Today, the best Detroit or Germany can do is 10 hours on a [production] line, after hundreds of years of progress.”

The car’s design was chosen from over 200 proposals submitted by Local Motors’ online community and Rogers says that the main advantage of 3D printed cars is that local communities may adopt such procedures to build cars best fitted to the resources available to them.

“In the future, you’ll still have … your Detroits that make one product the same over a million units,” the exec said. “And then I think you’ll have examples of microfactories that do things profitably at lower volumes—10,000 units, 15,000 units per year—and show the mass factories what they ought to build next.”

Local Motors chose an electric engine for the Strati because an electric powertrain was simpler to construct. Another advantage the Strati has is that it’s made from thermoplastic using a “Big Are Additive Manufacturing (BAAM) machine,” which is a fully recyclable material, meaning that it can be easily “chopped up and reprocessed back into another car.”

Even so, while using 3D printing technology to build a car might lead to less wasted material, a lot of energy might actually be required to print such vehicles.