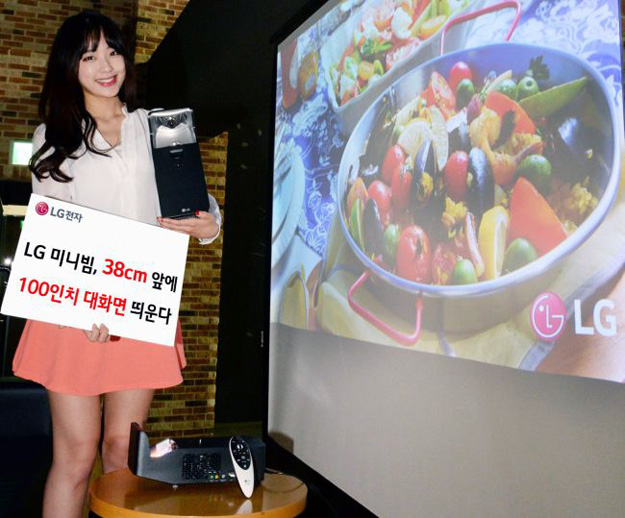 Projectors certainly aren’t the trendiest market segment in consumer and enterprise tech, but LG’s new MiniBeam model could be just the game-changer that makes projectors fashionable again (remember how cool home projectors were for a few years back in the early 2000s?). Late last week while the web was still buzzing about Apple’s new iPhone 6s and iPhone 6s Plus, LG showed off its new MiniBeam PF1000 projector, which uses an exciting new technology to beam a screen that’s larger and more clear than comparable projectors at surprisingly close distances.

As reported by Business Korea, LG showed off its new MiniBeam PF1000 projector during a press event late last week. The device, which is surprisingly compact for such a powerful projector, is capable of beaming a screen that measures 100 inches diagonally from a distance of only 14 inches away. Even more impressively, the projected image is full HD 1080p resolution with a brightness of up to 1,000 lumens and a contrast ratio of 150,000:1.

Those are some pretty impressive numbers for a compact projector.

“Short Distance Focus” technology makes the projector possible; it can project a focused image from distances that are roughly 10 times closer than projectors that are not equipped with this new tech.The PF1000 also includes integrated Wi-Fi with Miracast support, along with several hardware ports. It also includes a built-in Bluetooth radio to connect to speaker systems.

Get ready to be impressed: here’s a video of the PF1000 in action: