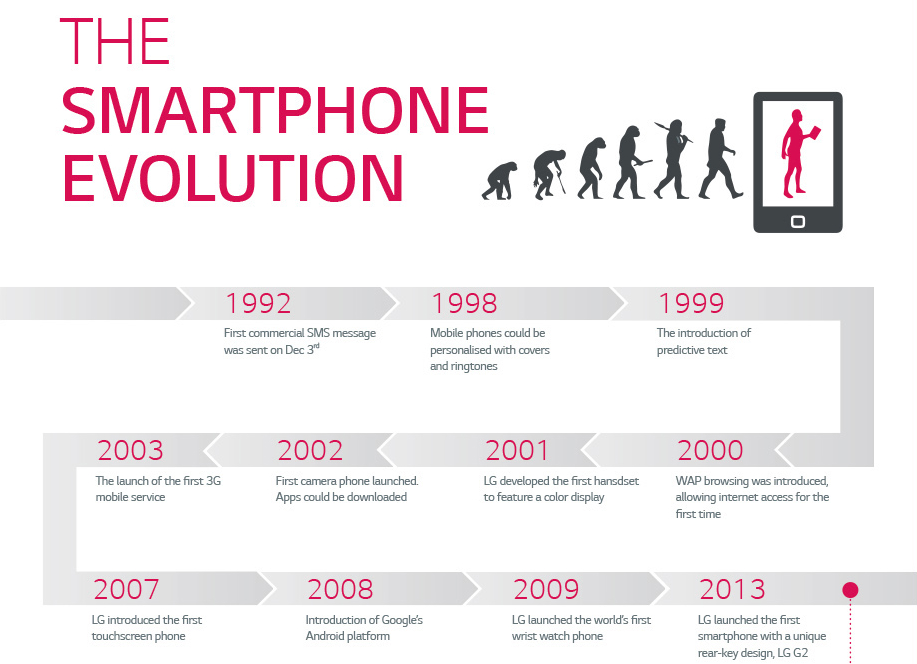 LG has released an interesting infographic that presents the history of the smartphone, including its past, present and potential future, at least according to the company. But for some reason, LG left out one particular event that actually made possible the very smartphones the company is selling today – the invention of the iPhone – though it did mark the launch of Google’s Android platform.

In early 2007, Steve Jobs announced a device that took the industry by storm and completely changed the mobile landscape – just ask about it the ones who suffered following that event, including Microsoft, Palm, BlackBerry and Nokia, or the ones who flourished including Samsung and Google (which was the quickest to adapt its Android strategy and turn the platform into the current market leader, at least by overall share) – yet in LG’s infographic 2007 is labeled as the year “LG introduced the first touchscreen phone.”

While that’s true, not everybody will remember that LG Prada phone because it essentially wasn’t such as big of a milestone in smartphone history as the iPhone or the first Android phone. When it comes to sales, LG sold 1 million Pradas in 18 months, compared to Apple’s 6.1 million original iPhone sales in 15 months. Samsung may always contest that infographic as well, as the South Korea giant has on numerous occasions mentioned its touchscreen devices that predated the iPhone, for entirely different reasons, but Samsung did not actually commercialize any of the prototype models it showed in court documents.

Another debatable element is the start of the smartphone evolution, not to mention that there are plenty of other events related to other companies that have shaped in one way or another the smartphone history. Was the first commercial SMS message sent on December 3, 1992 really the first smart feature of a phone that turned it into a smart phone? Does that mean that all phones from that point onward were smartphones? What about the feature phones that were released much later down the road, and which are clearly identified as feature phones nowadays?

LG concludes its infographic showing a peak at the “next step in the smartphone evolution,” one of the world’s first touchscreen devices with flexible displays, the LG G Flex that has started selling in various markets.