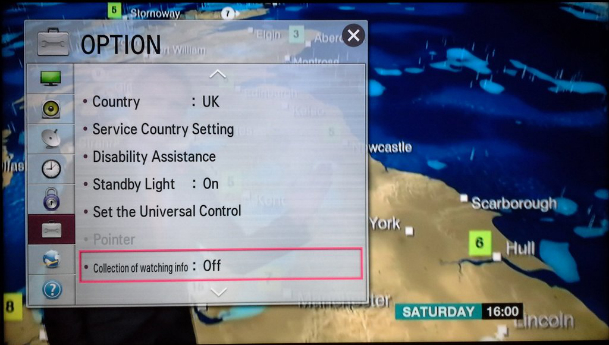 An LG Smart TV owner in the United Kingdom has shockingly discovered that his device is sending unencrypted data over Wi-Fi containing TV watching habits, as well as file names from external storage units hooked up to the TV to an LG website, even though the TV’s privacy settings should have prevented such behavior. The Smart TV model in question is the LG 42LN572V that was manufactured in May 2013.

The Smart TV has an option of collecting watching information from users, although TV owners are able to turn it off from the Option menu. Even so, the unnamed TV owner – identified as DoctorBeet on his blog– found that the TV was sending the information to an LG web address (GB.smartshare.lgtvsdp.com), which is currently offline, returning 404 errors when accessed. Even though it looks like LG is not collecting the data at this time, such a “feature” could always be enabled, at which point the company would receive information every time the channel is changed and even get access to file names on USB dongles or external hard drives, although file names have not been always sent to that specific URL in DoctorBeet’s tests.

However, in addition to using the data for advertising purposes, LG could also get a glimpse to what users are doing with their Smart TVs, especially when it comes to the kind of files they play on their devices from other storage units. Furthermore, since the data is not transmitted over an encrypted connection, it would be vulnerable to prying eyes.

It is not clear at this time whether this is a widespread issue for LG Smart TVs, or whether this was an isolated incident, but LG’s Smart Ad video promotion lists many other LG devices as capable of delivering such ads, including Smart TVs, Blu-ray players and even smart refrigerators. When contacted, LG UK basically told DoctorBeet that he has “unfortunately accepted the Terms and Conditions” on his TVs, and that nothing can be really be done. In response, DoctorBeet blocked access on his home Wi-Fi router to the web sites his Internet-connected TV could send information to, although that’s not something all Smart TV owners would know how to do.