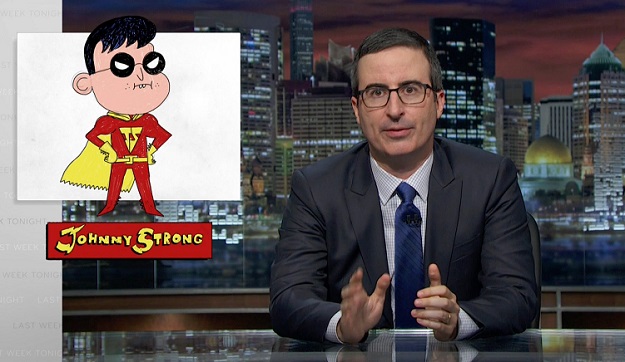 Last Week Tonight with John Oliver may officially be on hiatus until September 25, but the comedian that the Daily Show should have never let leave was up to his usual tricks over the weekend in the form of a web-only video about the sad state of superhero movies. If you’re looking for biting commentary about the stream of garbage superhero movies we’ve seen as of late, that’s not exactly what Oliver has in mind. While he touches on that every so briefly, the crux of Oliver’s web-exclusive video is essentially him pitching a brand new superhero, one that he originally came up with as a kid.

“Every year, the market is flooded with movies about superheroes,” Oliver said.  “Just this year, blockbusters included movies ranging from ‘Mean Spider-Man’ (a reference to Deadpool) to ‘Sad Man Versus Super Sad Man’ (a reference to Batman v. Superman: Dawn of Justice) to ‘The Insane Clown Posse Takes Manhattan’ (a Suicide Squad reference). I do think some audience members are becoming fatigued watching the same characters over and over again.”

It’s a fair point, especially when some of the recent superhero movies we’ve seen have been absolutely horrible. That said, the magic that was Deadpool shouldn’t be lumped together with garbage like Batman v Superman but that’s a rant for another day.

As for Oliver’s own superhero creation, meet a superhero called Johnny Strong. Comically modeled after Oliver as a youth, Oliver boasts that Johnny Strong is a “kickass hero with a bad attitude.” What’s more, Strong has “seen a boob and he knows what the F-word is.”

This isn’t the strongest segment from Oliver we’ve seen, but with the dynamic host on vacation for the next few weeks, it’s certainly better than nothing. You can view the entire 5-minute segment below.