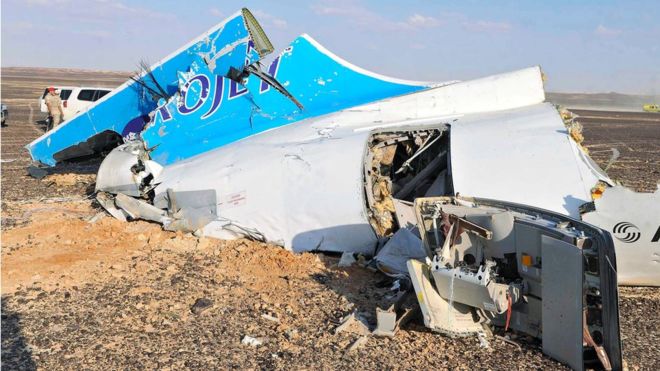 A few days after the Paris attacks that left hundreds dead and injured, Russia confirmed that a homemade explosive device was detonated on board MetroJet Flight 9268 in October, killing all 224 passengers. Since then, ISIS published images of the bomb that was detonated inside the airplane, saying that the Russian flight wasn’t the original target. Instead, ISIS wanted to shoot down a Western plane.

The image below shows a Schweppes can, a detonator and a possible trigger switch, The Telegraph notes. The picture was posted in the latest edition of the Dabiq propaganda magazine, right alongside pictures of passports and IDs belonging to the dead passengers.

The items pictured in the magazine could have been sufficient for a suicide bomber to trigger the explosive device, former Royal Navy bomb disposal officer Dave Welch told The Telegraph. “The damage caused would be quite significant given the pressure caused by the explosion and the close confines within an aircraft. It would be quite capable of ripping a hole in an airliner,” he said.

Russia believes the device was snuck aboard the plane and detonated using a timer device that was set for one hour. FSB believes the bomb contained industrially produced explosive such as plastique or TNT, and that it probably exploded in the passenger cabin, possibly beneath a passenger’s seat and next to a window towards the rear of the fuselage.

The bomb may have been smuggled on board by airport service personnel in charge of cleaning, or delivering baggage and food.

Meanwhile, ISIS explained it had a different target in mind.

“And so after having discovered a way to compromise the security at the Sharm el-Sheikh International Airport and resolving to bring down a plane belonging to a nation in the American-led Western coalition against the Islamic State, the target was changed to a Russian plane,” the message read.

One security source said that ISIS may have targeted a British passenger jet initially, according to reports.