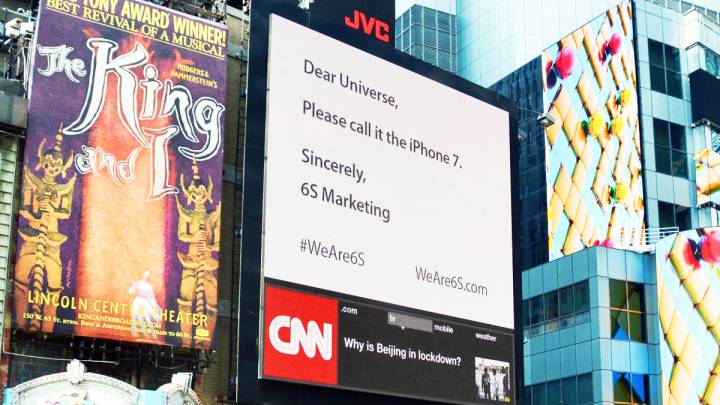 Apple’s next iPhone will likely be named iPhone 6s. The company is expected to launch an “S” generation of iPhones every two years, following a major redesign, and that seems to be the case for 2015. The upcoming iPhone 6s might offer a bigger “S” upgrade than any previous such model, but that might not be enough for Apple to call it the iPhone 7 all of a sudden.

However, one company is deeply affected by the iPhone 6s name choice and is urging Apple to go with iPhone 7 on September 9th as the official name of the 2015 iPhone – just check the image above, taken in New York’s Times Square.

“Dear Universe,” the ad reads. “Please call in the iPhone 7,” says the billboard. If that’s not enough, a similar sign was placed on a truck parked outside Apple’s glass retail store in Manhattan. “Dear Apple,” the sign says, “please call it the iPhone 7.”

This is a genius marketing move that seems to come from an advertising company. And, indeed, “6S” is the name of a small advertising firm behind the campaign.

“We called the company 6S because it sounds like ‘success,’” 6S Marketing President Chris Breikss said in a press release. “The name came from a custom license plate on a Mercedes that my father and I spotted when I was 11 years old — it read SSS SSS. After much deliberation, we realized that translated to ‘six-esses,’ or ‘successes.’ Years later, that eventually became the name of our company.”

“Our name is very important to us,” Breikss added. “After the iPhone 4S and 5S launched, we realized that our once-unique name could be in jeopardy, linked to the most popular mobile device in the world. We love Apple’s products; most of us use iPhones on a daily basis, and we’re flattered to potentially share the same name. However, we would prefer that Apple change the naming convention and consider calling their next phone the iPhone 7.”

While this marketing stunt is absolutely incredible, it’s not likely it’ll have any effect on Apple’s marketing plans. After all, just remember that HealthKit incident from a while ago, which similarly affected one particular company.

Unlike that instance, the iPhone 6s is probably not going to negatively affect the success of 6S – it might make it cooler by association.