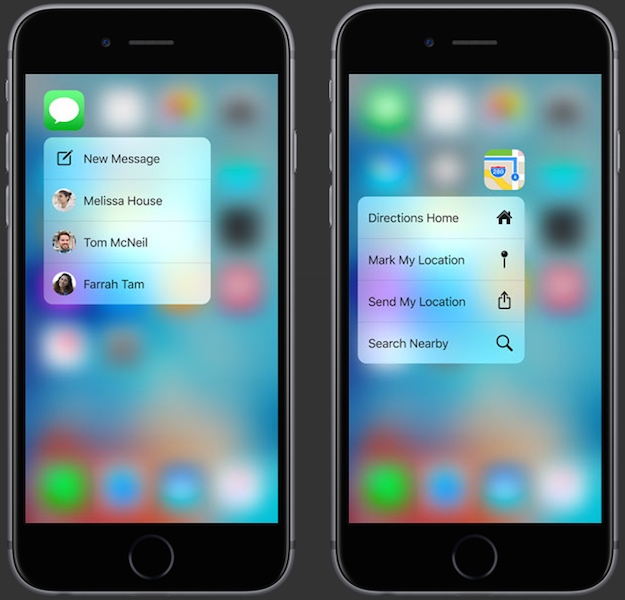 The iPhone 6s’s signature new feature is 3D Touch, a new way of interacting with the device that has given us new actions such as Quick Actions, Peek, and Pop. Peeling back the jargon, however, you can really categorize all of these new actions as shortcuts.

3D Touch on the iPhone 6s is only used for the time being for in-app shortcuts (Peek and Pop), and system-wide shortcuts (Quick Actions). The new gesture could be used for so much more in the future, though Apple seems to be limiting more advanced 3D Touch functionality for the time being.

Developers curious about what 3D Touch can do have already analyzed the complexity of the code necessary to make the iPhone 6s’ pressure-sensitive display work, and others have looked at different features that could be built into apps in the future that would use the new gesture.

Developer Victor Baro took to Medium to highlight some new 3D Touch-based features, but he also explained why working with 3D Touch can be tricky for the time being.

“We need to take into account that, because 3D Touch is only available in iPhone 6S and 6S Plus, no action should be completed just by using this feature,” he said. “The user should be able to achieve any action without using 3D Touch (just like Peek & Pop does), and 3D Touch should only provide an extra level of interaction.”

Baro then showed app concepts that let him control visual elements on the screen, zoom in and out on a photo and handle animation (see them below).

Developer FlexMonkey also posted a 3D Touch-based concept that would let a user apply filters to an image by only using force on the screen – the same developer has many other similar concepts on its blog.

If it wanted to, Apple could have introduced many additional 3D Touch gestures during the iPhone 6s event that may have completely changed the iOS 9 experience for iPhone 6s users. But the company is interested in offering the same set of core features to all iOS users, regardless of whether they’re on the iPhone 4s or iPhone 6s.

Yes, there are differences between devices, as certain iOS features require specialized hardware. But, essentially, apps behave similarly on any iOS 9 device, no matter how the user chooses to control them. By not using 3D Touch for anything else other than shortcuts, Apple is preventing fragmentation and making the job of developers easier.

In the future, as older devices will be replaced by iPhone 7 and following generations, it’s likely that 3D Touch will expand in functionality, and developers might be able to exert more freedom when it comes to adding the gesture to their apps. One of the major features 3D Touch might be tasked with could be replacing the Home button in next-gen devices.

One other hurdle Apple has to overcome to increase the complexity of 3D Touch is finding an intuitive way to tell the user that 3D Touch advanced functionality is available inside an app. Because, while it’s cool to zoom in and out of pictures using different pressure levels, you won’t do that unless something on the screen tells you there’s a 3D Touch gesture waiting to be discovered.