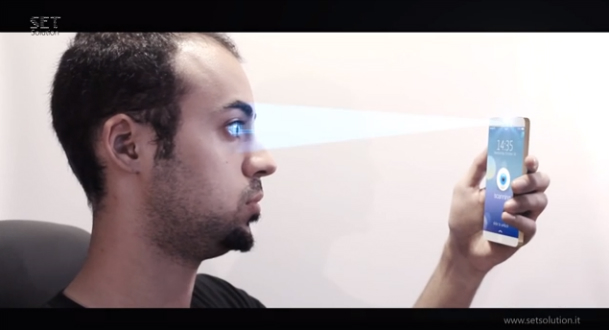 The same design team that imagined the iPhone Air and curved iPhone 6c concepts has also worked on an iPhone 6 concept that would offer an extra security feature, an EYE ID retina scan. SET Solution believes that the such a phone would be the “safest phone ever created,” allowing users to unlock the iPhone and log into the App Store, their bank accounts and other services with a “level of security never reached before.” Of course, Samsung may get a huge leg up on Apple if the Galaxy S5 launches early next year with an integrated eye scanner, but nothing is confirmed at this point.

The EYE ID retina scan feature would replace the Touch ID sensor that Apple recently introduced in the iPhone 5s, as this iPhone 6 concept features a significantly smaller physical Home button, to accommodate a bigger edge-to-edge display. Furthermore, the device seems to also pack two cameras and two strange-looking speakers on the back.

Naturally, this is just another design concept that has nothing to do with Apple’s actual upcoming iPhone plans; the odds of Apple ditching its $350 million fingerprint scanner technology after one product generation are exactly nil.

In addition to the aforementioned iPhone Air and iPhone 6c designs, here are some more fan-made iPhone concepts that Apple will not produce including a gold iPhone model and an iPhone with a wraparound display,