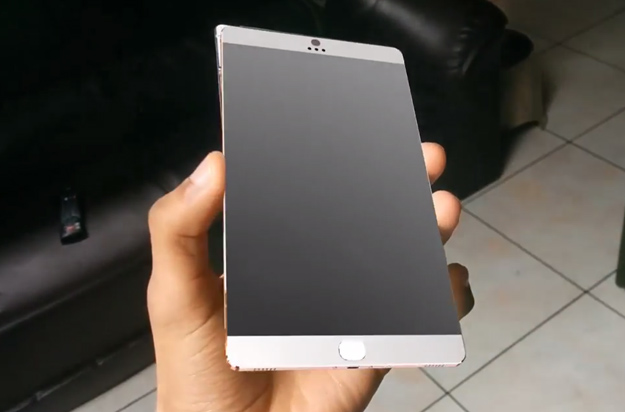 Most iPhone 6 concepts propose wild design choices and hardware rather than more believable ones, and such is the case with a new concept from designer Sahanan Yogarasa, who imagined an iPhone 6 smartphone that not only is ultra-thin, but also houses a slide out secondary display that’s even thinner.

Oh the fun we can have when we don’t have to consider reality.

According to the designer, this iPhone would be just 5.32mm thick and would sport two 5-inch 4K Ultra Retina displays, a new 2.3GHz quad-core A8 processor, 3GB of RAM, a 16-megapixel camera with 4K video recording support and iOS 8. Thus, such an iPhone model would directly compete with other Android phablets when it comes to hardware, something Apple has never done with its iPhones in the past.

When it comes to iOS 8 features, the designer has imagined a transparent wallpaper mode (that sounds similar to Apple’s patent that describes a transparent mode for texting purposes) and a new sharing technology between devices. Interestingly, Yogarasa suggested the OS would be jailbreakable as well by featuring the Cydia app store on the Home screen.

The device would be made of aluminum and offer dual stereo speakers, a Touch ID fingerprint sensor and a new wireless auto wireless battery-charging mode. Unsurprisingly, such an iPhone 6 model would be available in multiple colors.