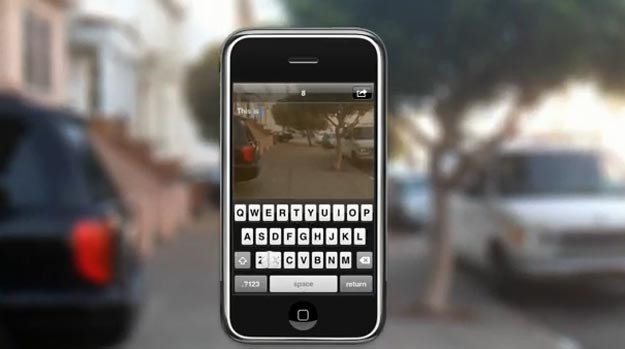 Now this is a good idea. In the age of the smartphone as an extension of our bodies, people’s faces are always buried in their iPhones and Android phones while they walk around. We see people walking into each other and into stationary objects all the time on trips to and from our Times Square office. Is there nothing that can save these poor souls from awkward collisions? Thankfully, Apple may soon come to their rescue with a brand new invention… that was already invented years ago.

In a patent application from late 2012 that the United States Patent and Trademark Office made public on Thursday, Apple describes a nifty iPhone feature called “transparent texting.” Here’s the abstract from the application:

The rear-mounted camera on a cell phone can be used to display a live video feed that is presented beneath the screen the user is typing on. That way, he or she can see the ground in front of him or her, even as text and emoji are being splashed across the screen.

There’s no telling if or when Apple’s great new tech will actually make its way to iOS devices, but luckily someone else invented Apple’s invention long before Apple invented it. First released back in 2009, “Type n Walk” is one of many mobile apps that perform the exact function described in Apple’s patent application.

Of note, this isn’t the first time Apple has filed a patent covering technology that already existed in third-party iOS apps.