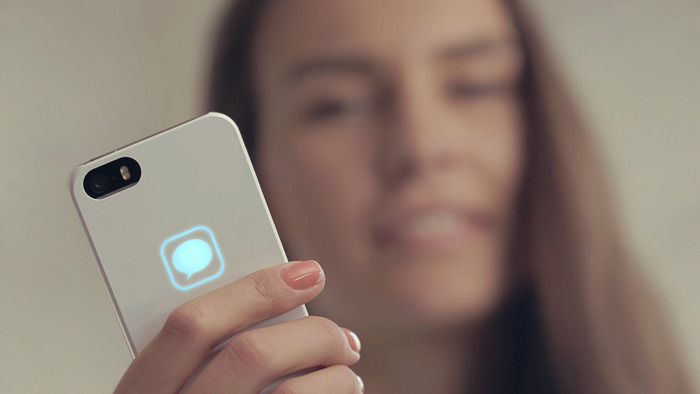 Lunecase is a new iPhone case that’s a lot smarter than other cases, as it’s able to harness the electromagnetic energy of the iPhone to show notifications for calls and messages. The case does not have any battery of its own and does not connect to the iPhone via its Lightning port, but it will detect incoming calls and texts by recognizing their respective wavelengths. By wirelessly picking up the energy it needs, it is able to then convert it into the energy required to display visual notifications.

“The Lunecase is the first intelligent iPhone cover,” the company wrote on Kickstarter. “The case knows and identifies when you receive a message or a phone call before it is even displayed on the iPhone’s screen. The Lunecase will identify the type of notification, whether it would be an incoming call, or a text message. The case displays these notifications on the back of your smartphone with the help of LEDs, using the free energy that is emitted by the device, converting it from the natural iPhone’s electromagnetic energy into a usable energy to power the notification system embedded in the Lunecase.”

The Lunecase is currently raising money on Kickstarter, and requires $50,000 to enter production. Interested buyers can contribute anywhere from $5 to $3,000 to this project, although they’ll have to pay at least $29 to get the intelligent case – the case will ship in August, assuming the crowdfunding campaign is successful.

The Lunecase will then retail for around $50 once it hits stores.

The team behind Lunecase has already delivered another interesting accessory for mobile devices with the help of Kickstarter, the iblazr camera flash that shipped last September.

The following videos show how the case works – including a hands-on video with a prototype device from CES 2014 (second clip).