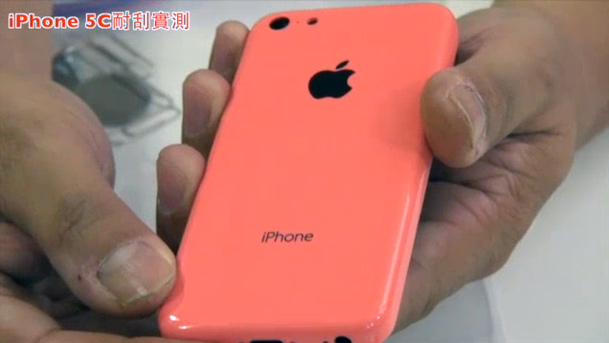 Apple’s apparent decision to dump aluminum and glass in favor of plastic on the upcoming mid-range iPhone 5C was likely a necessary one in order to keep costs down. While the result certainly looks like a device with a fit and finish that can’t match the iPhone 5, will the 5C be any less durable? Apple Daily sought to answer that question, and it recently put several leaked iPhone 5C case and screen assemblies through some tough torture tests to see how they would fare.

Apple Daily took what it claims to be Apple’s upcoming iPhone 5C and dropped it into a bag with various items one might find in their pockets, such as coins and keys. The blog also used screws and paper clips for good measure. After shaking the bags to ensure solid contact with the enclosed items, the iPhone 5C appears to emerge unscathed.

The videos also show that the iPhone 5C measures of 124.55 millimeters tall by 59.13 millimeters wide and 8.98 millimeters thick, which is slightly shorter, narrower and thicker than the current-generation iPhone 5 at 123.8 x 58.6mm x 7.6 millimeters.

Apple’s new iPhone 5C is expected to debut at a press conference on September 10th, and it is said to be launching in at least five different colors. Also set to be unveiled at Apple’s press conference next month is the flagship iPhone 5S, which will reportedly feature a design that is nearly identical to the iPhone 5 but with a faster processor, an improved camera, an embedded fingerprint scanner and a new gold color option.

Both devices will reportedly launch on September 20th.

One iPhone 5C torture test video follows below and the second can be seen on Apple Daily’s site, which is linked in our source section.