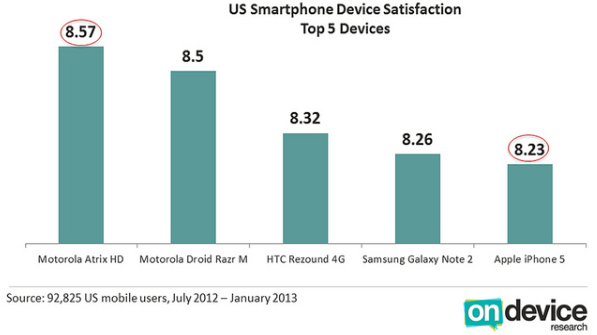 Apple (AAPL) is traditionally ranked near the top in satisfaction surveys due to the simplistic nature of its products. A recent polls suggests that the company’s latest smartphone isn’t doing as well as its competitors, however. According to OnDevice Research, four Android smartphones were found to have higher customer satisfaction ratings than the iPhone 5 in the United States. The research firm found that consumers were happiest with Motorola’s Atrix HD and DROID Razr M, followed by HTC’s (2498) Rezound 4G, and Samsung’s (005930) Galaxy Note 2. The iPhone 5’s rating of 8.23 was only good enough for the No.5 spot.

“Although Apple created one of the most revolutionary devices of the past decade, other manufactures have caught up, with some Android powered devices now commanding higher levels of user satisfaction,” On Device Research marketing manager Sarah Quinn told CNET.

Apple fared better in the United Kingdom, where the iPhone 5 received a score of 8.21, falling only behind HTC’s One X smartphone with a score of 8.47. Samsung occupied the next three spots with its Galaxy Note 2, Galaxy S III mini and Galaxy S III.

Despite the shortcomings of the iPhone 5, Apple was still ranked highest for overall mobile device satisfaction. The company took the top spot in the U.S. ahead of Google (possibly accounting for its Nexus-branded devices), Motorola, HTC, Nokia (NOK), and Sony (SNE). Oddly enough, Samsung was ranked at the very bottom of the chart.

OnDevice’s data comes from a survey of more than 300,000 smartphone owners in the U.S., the U.K., France, Germany, Japan and Indonesia.